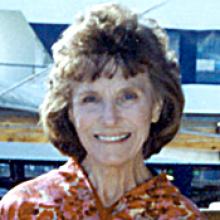 LOIS SUSAN MCKELLAR (nee HOBDAY) Lois Susan McKellar (née Hobday) of Winnipeg, formerly of Nesbitt, beloved mother of Malcolm and Barb, and dear grandma to Pearce and Rayna, entered into eternal peace at Riverview Health Centre, Winnipeg on Saturday, July 16, 2011. Lois was born and raised in Winnipeg, and was the eldest daughter of Reginald and Phyllis Hobday. Lois was very proud of her father, and tried to emulate his work ethic all through her life, this lead to her unique business sense. Her creative flair, love of painting and gardening, came from her mother. During the 1950s, Lois started working for the Province of Manitoba. She proofread the bills brought before the legislature. She eventually became the personal secretary to the Lieutenant Governor of Manitoba. This is how she eventually met her future husband, Earl McKellar who was the M.L.A. for Souris-Lansdowne. Lois and Earl were married in November of 1960. Lois moved to the family farm at Nesbitt and became a farmer/politician's wife. In 1964 they had their son, Malcolm. Lois loved gardening and planting trees, and she transformed the old farmyard into something of a park. She also renovated the house from a bachelor pad into a family home. Lois and Earl were together until his untimely death in 1976. Lois made the decision to stay on the farm in Nesbitt. With the help of Milt Budd, Donny Cory, Henry Cory, Lyall Cory, George Huitema and Malcolm she decided to run the family farm. In 1990, she moved back to Winnipeg and purchased a house in Lindenwoods to be closer to her mother, and her sister Eunice. She also enjoyed being closer to her cousins in and around Winnipeg. She was very proud when Malcolm and Barbara were married, and of her two grandchildren Pearce and Rayna. She loved taking them to the zoo in Winnipeg when they were younger. In the fall/winter of 2009, Lois was diagnosed with cancer and went through radiation treatments. In January of this year, Lois moved into Thorvaldson Intermediate Care Centre and spent six enjoyable months there. From there she was transferred to Riverview Health Centre, where she succumbed to her illness. Lois is survived by son, Malcolm, daughter-in-law Barbara, grandson Pearce and granddaughter Rayna. She is also survived by sisters-in-law Treva Gorrie and Irene McKellar; family friend Carl MacDonald; and special cousins Lenore and Hal Parker, Marion and Don McCarthy, Doris Tibbs, Wes Hull and Jim Hull. Lois was predeceased by her husband, Malcolm Earl McKellar; parents Reginald and Phyllis Hobday; sisters Shirley Dawson and Eunice Hobday; brothers-in-law Bob Dawson, Duncan McKellar, Neil McKellar, Elwood Gorrie, Kenneth Gray and Jack Obleman; sisters-in-law Janet Gray and Gwen Obleman. The family would like to thank the staff at Thorvaldson for going above and beyond in regards to the care and support provided to our mother and grandmother. We would also like to thank the staff at Riverview Health Centre, Palliative Care Unit, for the care and support provided to mom and ourselves. A service to honor Lois's life was held at Brockie Donovan Chapel, Brandon on Thursday, July 21, 2011, with Mr. Stephen Parker officiating. Interment was held at Minnewawa Cemetery, Nesbitt, MB. In lieu of flowers, donations in memory of Lois may be made to CancerCare Manitoba, 675 McDermot Avenue, Room 0N1160, Winnipeg, MB, R3E OV9; or the Canadian Cancer Society, 415-1st Street, Brandon, MB, R7A 2W8; or the Riverview Health Centre Foundation, One Morley Ave, Winnipeg, MB, R3L 2P4. Messages of condolence may be placed at www.brockiedonovan.com. Arrangements were in care of Brockie Donovan Funeral and Cremation Services (204) 727-0694.