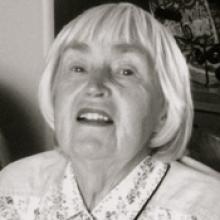 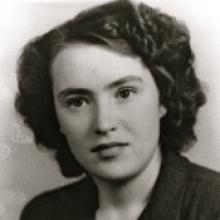 MARY LORNA LAMONT Mary Lamont, born December 2, 1924 in Winnipeg, died October 24, 2011 in Powell River, BC. Mary Lamont was the eldest of five surviving children of John S. Lamont and May Bastin. She received her formal education at United College (B.A.) and the University of Manitoba (B.Sc. and LLB), though she always claimed that most of what she learned of significance was acquired growing up during the Depression in the bush on the banks of the Assiniboine River in Headingley, MB. Predeceased by brothers Charles and Frank of Winnipeg, and by former husband Robert Mitchell. Survived by brother John of Winnipeg; sister Jean Pycock of Havelock, PQ; children, James (Margaret) Mitchell of Ottawa, Gordon (Pamela) Mitchell of Powell River, and Catherine Mitchell of Toronto; grandchildren Jack (Luba), Dave (Jess), Tom, Mike, and Mary; great-grandson Caius, and many nieces and nephews. Like many Canadians of her generation her life was much affected by a childhood spent on the Canadian prairie during the Great Depression, and by an early adulthood spent during the Second World War. Her father was a successful lawyer in Winnipeg, but nobody had any cash, so in 1930 he moved his family to a river lot in Headingley where it was possible to survive on what you could grow and on fees that were more likely to be paid in chickens than in coin. Though poor she felt she had a great childhood because "We didn't know we were poor. Nobody else had any money either, and we had loving parents, good books to read, and the Assiniboine River at our back door." Mary served in the Canadian army during the war, something that was a source of great pride to her. She kept her battle dress in excellent condition and wore it every year on November 11. She was especially proud to wear it and be acknowledged as a Canadian Veteran during a visit to Juneau Beach in 2004. Mary had three occupations, the first as a mother, which she thought was society's most important; then as a Manitoba lawyer; lastly as the editor of ProLife News. Her brother John nicknamed her Deliv, from the French de livre, because she was forever reading books. It was an apt nickname. She was extremely well read, with a correspondingly strong intellect. She encouraged all of her children, grandchildren, and nieces and nephews to develop a similar passion for reading. Mary was possessed of a positive outlook and an engaging humour. She instilled confidence in others simply by being confident in them herself. She was an optimist; she liked people, and rarely complained. As many of us age we shed the veneer of acceptable behaviours that we were taught as children. Mary had no veneer; her kind nature never changed. She spent the last six years of her life in care facilities in Powell River, mainly at the Olive Devaud Residence. She did so with praise and gratitude for her caregivers. Her family would like to thank the staff of Olive Devaud for their outstanding care. Funeral service to be held at Holy Trinity Church, Headingley, MB, 2:00 p.m., November 19. Those wishing to honour Mary's memory please consider a donation to a charity that assists children.