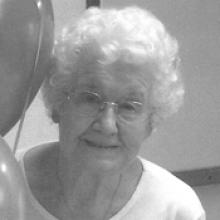 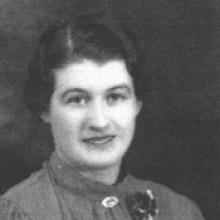 DORIS MARGARET SCARROW 1916 - 2011 Following a well lived life Doris Scarrow passed away peacefully on Thursday, October 27 at Concordia Place. She was predeceased by her parents, husband James, brother Charles, daughter-in-law Linda and son-in-law Patrick O'Connor. Doris is survived by her son Wayne, wife Linda and their children James (Lynsey), Suzanne (Rob), Nick (Heather) and Kyle (Rebecca); her daughter Misty (June) O'Connor and her children Darwin (Karla), Russell (Ann) and Albert (Jessica). She is also survived by eight great-grandchildren whom she adored and who kept her young at heart. She will be especially missed by her sisters Marjorie Merner, Phyllis Bray and Maxine Clark, the Golden Girls , who, together with Doris, demonstrated to all the importance of tolerance, respect, laughter and love of family. Doris was born on July 22, 1916 on the family farm near Justice, MB. She took great pride in reminding everyone there's still a little Justice in the world . Doris and James lived in Fairfax, Kelwood and Emerson before settling in East Kildonan in 1947. It was here that she raised her family and was involved in all aspects of the life and work of her community and Church. Her love of gardening and flowers eventually led to her work as a florist. Retirement brought many enjoyable winters in Arizona with rewarding friendships and opportunities to travel extensively throughout Canada, United States, Europe and Australia. Doris made lifelong friends wherever she went. The family wishes to thank the doctors, nurse practitioner, nurses and staff of 3D Concordia Place for the dedicated care and compassion extended to Doris and her family while she was a resident at Concordia Place. A memorial service in celebration of Doris's life will be held at 2:00 p.m. on Saturday, November 5, 2011 at John Black Memorial United Church, 898 Henderson Highway. In lieu of flowers, donations in Doris's memory may be made to The John Black Memorial Church Foundation, 898 Henderson Highway, Winnipeg, Manitoba, R2K 3T4, The Alzheimer Society of Manitoba, 10-120 Donald Street, Winnipeg, MB or a charity of one's choice. NEIL BARDAL FUNERAL CENTRE (204) 949-2200 nbardal.mb.ca