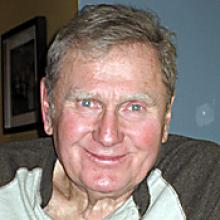 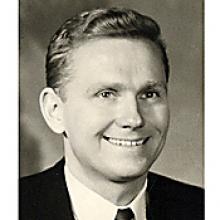 REVEREND DEACON DR. LORNE ANTHONY REZNOWSKI Reverend Deacon Dr. Lorne Anthony Reznowski passed away peacefully on Wednesday, November 9, 2011 at his home in Winnipeg. The son of Dr. Lorne William and Anna Reznowski (Brokowska), Lorne was born on January 5, 1929 and raised on both Boyd and Selkirk Avenues in the North End where he attended Saint Nicholas Ukrainian Catholic School. He obtained a BA in Philosophy at Loyola College in Montreal in 1949 where he was a prominent member of the debating society. He traded in his textbooks to work as a longshoreman on the docks of Vancouver and on the CPR's passenger steamship the Princess Joan, sailing nightly between Vancouver, Victoria, and Seattle. In 1957, he graduated with a Licentiate in Sacred Theology from the Catholic University of America in Washington, DC where he was a student of St. Josaphat's Ukrainian Catholic seminary. Lorne met Joan Reznowski (Heslop) a beautiful girl from Newfield, NY at the Uline skating arena in Washington and they married in 1959 after corresponding for a year while she worked in Germany. Lorne and Joan lived in Ottawa while Lorne studied and taught at the University of Ottawa completing both his MA and PhD in English Literature. In 1966 Lorne and family moved to Winnipeg to teach at Saint Paul's College, University of Manitoba, until his retirement in 1993. In 1970 Lorne was the first permanent Ukrainian Catholic deacon ordained in the Winnipeg Archeparchy and served at Holy Family parish. A talented orator, he was a courageous and outspoken apologist for the Catholic faith, both in his professional and in his personal life. His father's concern for the problem of poverty in the midst of plenty during the Great Depression led Lorne to become active in the Social Credit movement from an early age, and by the time he was twelve he was doing radio broadcasts for the Social Credit party. He ran twice federally in 1968 and 1978. At the 1978 convention in Winnipeg Lorne was elected the party's national leader, resigning the following year. Lorne was a polyglot who spoke and studied nine languages. Together with his wife and children he lived and travelled throughout Europe and North America, spending sabbatical years in Spain, Germany, Italy, and Tucson, Arizona, experiencing life to its fullest. Lorne was predeceased by his wife Joan, his parents Lorne and Anna, his brothers James and Paul, sister Celeste, and son-in-law David DeMaré. Lorne will be lovingly remembered by his children Tony (Olenka), Tanya Schrantz (Jeff), Ted, Daniella DeMaré, and Gabriella, as well as his 14 grandchildren, Jeffrey, Mallory, Deanna, Stijn, Dries, Kalyna, Davis, Maksym, Markian, Avila, Xavier, Sasha, Inez, Anissa, sister-in-law Kerri, niece Genevieve, and nephews Marcus, Gerard, Maurice, and Marcel, and many nieces and nephews on his wife's side of the family. The faith and wisdom he imparted, the stories he told and the experiences he shared will bring strength and comfort to his family and friends. A staunch defender of life from conception until natural death, Lorne fought a brave battle with cancer in his final 30 months. Prayers will be held on Tuesday, November 15 at 7:00 p.m., preceded by the rosary at 6:30 p.m., at Holy Family Ukrainian Catholic Church, 1001 Grant Avenue where Divine Liturgy will also be celebrated on Wednesday, November 16 at 10:00 a.m. Interment will follow in All Saints Cemetery. In lieu of flowers, donations may be made to Eternal Word Television Network, PO BOX 157 Station A, Etobicoke, Ont. M9C 4V2 https://www.ewtn.com/VSDonationML/CanadianDonors.aspx or Breakfast for Learning, 164 Eglinton Avenue East, Suite 400 Toronto, Ontario M4P 1G4 http://www.breakfastforlearning.ca Vichnaya Pamyat! CROPO FUNERAL CHAPEL 586-8044