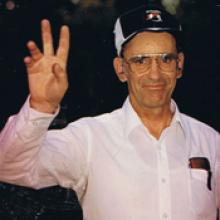 ALAN RICHARD BARTLETT May 1, 1925 - November 11, 2011 At about 10:30 a.m. on the morning of Remembrance Day 2011, just as the country was paying tribute to our veterans, Al Bartlett died. In life, he was proud of his Air Force service and on this chilly Winnipeg November morning, sharing the collective memories with our fellow citizens was a fitting way to remember this colourful spirit. Al left us with many wonderful memories of his adventurous life and his unique sense of humour. He lived his life to the full, on his own terms right to the end, passing peacefully from our world at the grand age of 86 years. Predeceased by his parents, George Wesley and Dorothy Woolgrove Bartlett and his two sisters Ruth (Allan) Robertson and Fern (Owen Tudor) Hughes, Uncle Al leaves behind a large extended family of nieces and nephews, great and great-great-nieces and nephews. He was lifelong resident of Winnipeg, mostly in St. James. From an early age, Al showed an aptitude for mechanics, recycling old bicycle parts to make new ones, and he was passionate about flight and all things to do with aviation. These boyhood fascinations were the foundation for his career as an aircraft maintenance engineer in the Royal Canadian Air Force. He served his country from the mid 1940s until 1969, stationed in Germany, Bagotville, Quebec, and Gimli, Shilo and Winnipeg, Manitoba. He recorded over 18,000 hours in his flight logs, as a bush pilot flying float planes into the north, doing test flights with the Experimental Aircraft Association (EAA) and as a flying instructor with the Winnipeg Flying Club. He touched many people over the years with his dedication, professionalism and commitment to his vocation. Al traveled widely and maintained countless friendships around the world. A regular attendee on the North American air show circuit, his annual pilgrimage to the EAA AirVenture Convention in Oshkosh, Wisconsin was one of the highlights of his year. He seemed to know everyone who had ever flown an airplane in Canada and he almost certainly knew someone at every airport in North America. He put that knowledge to work as a volunteer at the Western Canada Aviation Museum archives, identifying aviation people in old photographs. A very private and fiercely independent person, he maintained an aura of mystery to his family and we would love to know more about this intriguing man. To those of you who have walked with Al over these past eight decades, we would be honoured if you could share with us your recollections from his life. Feel free to visit the Memories of Al Bartlett Facebook group and post your recollections, stories and photos there, or email them to lgray21@mts.net Al s family is thankful to his home healthcare givers and the staff at Riverview Health Centre 3E for their wonderful, compassionate care of our beloved Uncle over the past few months. When you would ask Al how he was feeling, his response was invariably With my hands. Farewell Uncle Al. To which you may have replied: Betty Boop, Betty Boop, Betty Boop Boop Boop --- Hi Ho Silver ---- And Away!!!!!! Rest in peace. A celebration of Al Bartlett s life will be held at 3:00 p.m. on Saturday, November 19, at the Neil Bardal Funeral Center, 3030 Notre Dame Ave(across from Brookside Cemetery). In lieu of flowers, please consider a donation to a charitable organization close to your heart. NEIL BARDAL FUNERAL CENTRE (204) 949 2200 nbardal.mb.ca