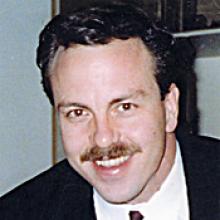 DOUGLAS NEAL FUTZ Douglas Neal Futz, age 52, died in Denver, Colorado on November 20, 2011 from Cancer. Doug died the way he lived; he fought with determination and suffered with grace and dignity. Born June 23, 1959 in Teulon, Manitoba to Joyce Futz (nee Enberg) and Ed Futz. Doug graduated from Gordon Bell High School and went on to obtain his Bachelor's in Commerce, Master of Science in Economics at University of Manitoba, also his Masters of Environmental Design at University of Colorado and was pursuing his PhD in the College of Architecture at University of Denver. On January 2, 1988 Doug married Cathe Tocher. They had the misfortune of losing their son Justin Paul at birth on June 26, 1989, but were lucky to have Mikyla Rae who came along on June 25, 1990. On November 17, 1990 they moved to Denver, Colorado, Rory Douglas was born August 9, 1993. Doug was a mentor to children of disabilities and gave his time to many organizations that he was passionate about. Doug's heart was as big as he was. He had a gift for understanding and giving what people needed, for nurturing relationships and for helping others unconditionally. Doug is survived by his wife Cathe Tocher, daughter Mikyla and son Rory of Denver; his father Ed Futz in Winnipeg; his brother Brent Futz in Teulon, and his sister Janice Futz in Calgary. Doug was preceded in death by his mother Joyce Futz and his son Justin Paul Futz. A memorial service was held on December 1, 2011 at Parker United Methodist Church in Denver, CO. Memorial contributions are welcome at Cancer Research (Colon, Liver). Thanks to family and friends for the love and care over the last several months. Doug, through you we have learned and accepted that some of us are called away early in this life for reasons we simply cannot understand but we cherish the time we have spent with you knowing that the real joy in living is the journey itself and how deeply we allow ourself to experience it. Safe Passage Doug