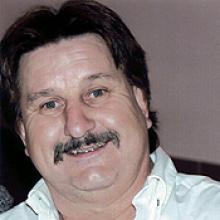 FRED DEMCHUK (FRITZE) September 11, 1954 - December 02, 2011 It is with great sadness that the family announces the sudden passing of Fred on Friday, December 02, 2011, after a brief battle with cancer. Fred was born in Winnipeg on September 11, 1954. He was raised in the North End of Winnipeg and attended King Edward, Issac Newton and Sisler schools where he made many life-long friends. He met and married Gerry (Murphy) on November 18, 1978 and they had 3 children, Erin (Marlon), Ryan and Sean. He will be greatly missed by his grandchildren Nevaeh, Markez, Faith, Aiden and Aiden's mom Emily, sister's in law Wendy Murphy, Kerry Green and family (Burlington, ON) and brother-in-law Michael Murphy and family (Selkirk, MB), as well as his special mother-in-law Sheila Murphy (Shoo-Shoo). He will also be missed by his many friends. Fred was predeceased by his mom and dad Mary and Michael. Fred had several jobs prior to him finding his niche in life - that being at CP Rail. He began his career with the railway in 1977 as a brakeman, then conductor and in the 1980's became a Locomotive Engineer. He made many lasting friendships with his fellow hoggers . He was involved with the Union and enjoyed playing hockey with the CP Rail team. Fred retired in August of 2008 after 31 years. Fred, Gerry and their family enjoyed many summers at Clear Lake, with the rest of the Murphy clan, as well as in their backyard where they enjoyed many BBQ's and pool parties with friends and family. Recently Fred returned to the place he loved to spend his summers - Winnipeg Beach. Fred loved to play pool and could be found on many a day at AAC or Eddy's visiting with friends and trying to perfect his shot . He also enjoyed going to the clubs where you could find him enjoying a beer, smoking a stogie or maybe singing karaoke. Fred also loved to golf and could be found on the courses of Winnipeg with many of his golfing buddies. Fred was a car enthusiast and enjoyed cruising in his Firebird convertible. He also loved motorcycles and could be found riding, with friends on a warm summer evening. One of Fred's biggest dreams was to go to Graceland to see where his idol, Elvis Presley lived, unfortunately that dream was cut short by his illness. The family would like to thank all of Fred's friends who made his final days special and brought a smile to his face. Precious Lord, Take my hand, Lead me on, Let me stand - I am tired, I am weak, I am worn, Through the storm, Through the night, Lead me on to the light, Take my hand precious Lord, Lead me home . A service celebrating Fred's life will be held on Saturday, December 10, 2011 at 10:30 a.m. at Cropo Funeral Chapel, 1442 Main Street, Winnipeg, Manitoba. A reception will be held following the service. We love you and will miss you!