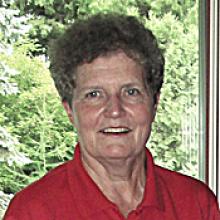 LILLIAN PEIRSON (nee RITCHIE) November 10, 1944 December 3, 2011 Surrounded by the love of her family, Lillian passed away December 3, 2011, in the St Paul's Home, Dauphin at the age of 67. A devoted wife, mother and grandmother she will be missed by all who knew her. Lillian leaves to cherish fond memories her family, her loving husband of 44 years, Walter; daughter, Heather and husband, Yannick Charland, of Barrie, ON; grandson, Mikka, and granddaughter, Maëlle; her mother and father, Ross and Tyyne Ritchie of Dauphin; brother, Raymond Ritchie of Dauphin; sister, Cathy Ritchie and husband, Peter Parys, of Winnipeg; sister-in-laws and brother-in-laws, Valerie and Darcy White of Thornhill, MB; Ashley and Kathy Peirson of Regina; Harry and Buddy Peirson of Fort McMurray, AB; and Murray and Sherry Peirson of Roland, MB; along with two nephews and 12 nieces and her many friends. Lillian Ritchie was born in Dauphin on November 10, 1944, and grew up on the family farm in the Mountview district. After high school she attended the University of Manitoba, where she earned Bachelor of Home Economics and Bachelor of Education degrees, as well as a Certificate in Volunteer Management, and a Certificate in Advanced Gerontology. On June 17, 1967, she married Walter Peirson, a Canadian Forces pilot. Over the next 30 years postings took them to P.E.I., Winnipeg, Ottawa, Alberta, Toronto, Germany, and Belgium. Their daughter, Heather, was born in Germany in 1976. In spite of moving many times, Lillian worked as a teacher in four different provinces. Later in Winnipeg, she worked in a personal care home for several years. While living in Europe, she took the opportunity to travel extensively, as well as becoming an avid skier and curler. Wherever she went she was eager to get involved, organize and volunteer. A prolific artist in oils and watercolours; for a number of years while living in Winnipeg, she belonged to two art clubs and a co-op art gallery. In Winnipeg, she also became heavily involved in supporting figure skating at the club, regional and provincial organizational level. Cooking was a passion throughout her life, she loved seeing people enjoy her good food, whether serving two or two hundred. In July 1997, the Peirsons retired to an acreage south of Dauphin, where Lillian could fully realize another of her passions gardening. Her yard and garden were always exceptional and she worked tirelessly at helping to improve Dauphin through gardens and landscaping Her volunteer work in the community, organizing and fundraising, was outstanding. Her involvement was always wholehearted and unselfish. Organizations she worked with include, Dauphin Health Care Auxiliary, United Church Women, Dauphin and District Community Foundation, United Commercial Travellers, Dauphin and District Chamber of Commerce, Lady Ducks Unlimited, Communities in Bloom/Dauphin Beautification Committee, Dauphin Agricultural Society, Dauphin Agricultural Heritage Club, Dauphin Horticultural Society, Sunshine Garden Club, Dauphin Royal Canadian Legion and Ladies Auxiliary, and Fort Dauphin Museum. The funeral will be held at 2:00 p.m. Saturday, December 10, 2011 at the Dauphin First United Church. In lieu of flowers, donations to the St Paul's Home Dauphin are greatly appreciated. The family thanks the doctors, nurses, aides and support staff of the Dauphin Regional Health Centre and St Paul's Home for their care and kindness over the last 14 months.