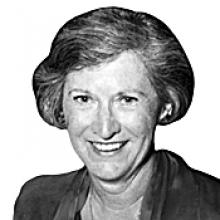 SHIRLEY EDYTH MARTIN Shirley Edyth Martin passed away peacefully on November 25, 2011 with family at her side, to join Bob, her loving husband of 59 years, who passed away in June of this year. Shirley was born July 27, 1927 in Winnipeg, MB, where she was raised alongside her four older siblings. Although she grew up in Winnipeg, her fondest memories were of her times spent at Cloverlodge Farm the family farm south of Morris, MB. She was an animal lover by nature and could often be found on the back of a horse or with a pet by her side. As a youngster, she would help cool out the teams of draft horses when they came home from working in the fields. Thus began her lifelong love of horses, which included participating in and watching many horse shows, as well as following thoroughbreds at Assiniboia Downs in Winnipeg and ultimately attending the Kentucky Derby. As a young woman, Shirley attended the University of Saskatchewan and graduated with a diploma in Agriculture in 1948, at a time when there were few women in that faculty. While studying at the University of Saskatchewan, she met Bob Martin, who had returned from the military to finish his Agriculture degree. Upon graduation, Bob followed Shirley back to Winnipeg, where they were married in 1952. They began their family in Winnipeg and soon moved to Brandon, MB, where their family expanded to six boys, including two sets of twins. Eventually they purchased farmland on the outskirts of Brandon, which they called Brookwood Farm but is now known as Brookwood Park. While Bob operated the local International Harvester farm equipment dealership, Shirley took an active role in their expanding mixed farming operation, which involved raising horses, grain, hay, and cattle. She balanced economic challenges and the demands of raising a family with her desire to provide opportunities for her sons to pursue their interests and activities. She was a beautiful, elegant, and talented lady, and her eye for quality extended from horses to art and fashion. Brandon, MB was very good to Shirley and Bob and to their family. They were fortunate to know many tremendous people in Manitoba and Saskatchewan. Shirley contributed to the schools, churches, athletic associations, and clubs in her community, such as the Rotary Club, in which they were active for more than 50 years. In 1981, Shirley and Bob retired to White Rock, BC and enjoyed their West Coast home and holidays to Maui, HI. They also loved to host the many wonderful friends they made in their community and through their continued involvement with the Rotary organization. They were always thankful for their many blessings, particularly for the opportunity to share time with their beloved family. Shirley extended her hospitality to many, and affected all with her love of life. She will be fondly remembered as a loving and inspirational woman, who selflessly devoted herself to her husband, her sons, and the many family and friends who will dearly miss her. Shirley was predeceased by: her parents, Gertrude and Honourable William R. Clubb; her sisters, Wilma Christie and Catherine Mitchell; and her brothers, William Garth Clubb and George Clubb. Shirley is survived by: her sister, Marguerite Sloan; her six sons, Larry (Heidi), Doug (Kari), Rob (Dori), Bill (Lorna), John (Elly), and Gord (Caroline); her 15 grand-children, Robert (Joyanna), Carla (Ryan), Brian, John, Kristine, Andrew, Kelsey, Haley, Stacey (Mark), Lesley, Giulia, Madeleine, Emilie, Peter, and Laura; her two great-grandchildren, Liam and Heidi; and her many extended family members. The family thanks the staff of the Delta View Life Enrichment Centre for Shirley's exceptional care throughout the past five years. A service for Shirley Martin will be held on January 7, 2012 at Victory Memorial Park Funeral Centre, in Surrey, BC, at 1:00 p.m. A Celebration of Life will be held in Manitoba, during the summer of 2012, to honour the life of Shirley Martin. In lieu of flowers, donations can be made to the Alzheimer Society, British Columbia.