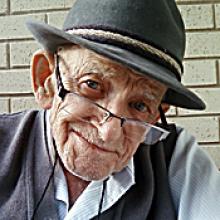 MICHAEL (MIKE) SPACK 1922 - 2011 Passed away on December 16, 2011 at the St. Boniface General Hospital with family and his feline companion Luigi at his side. He has completed his life journey of outstanding sports achievement, a fulfilling career in the education field, and a commitment to family through a loving marriage of 61 wonderful years to Kathleen (Saint). Mike was the eldest son of five children born on March 5, 1922, in Winnipeg, Manitoba to parents Nettie (Sochasky) and William Spak. Growing up in the Disraeli district, he was guided into a lifelong love of sports by Dr. Jim Shaver at the Sutherland Mission. After graduating from St. Johns Technical High School he enlisted in the RCAF in August 1941 as Michael Spack. Mike was a Pilot Officer in the RCAF in the Second World War, reporting for overseas duty on Christmas Day 1942 piloting the famed Mosquito Bomber till June 1945 with the 163 Squadron, RAF Station Wyton. He was discharged on October 2, 1945. He met his bride to be on January 1, 1943, after being posted to RAF Station Calveley located about two miles from her home in the lovely town of Nantwich, Cheshire, England. They were married on April 10, 1945. Kathy immigrated to Winnipeg to join Mike in 1946 followed by her parents shortly thereafter. After returning to Canada, Mike attended United College and University of Manitoba obtaining a teaching degree. His career in education spanned four decades culminating as an associate professor at Brandon University. Kath and Mike lived for 40 years in Brandon, Manitoba until his return to Winnipeg in 2006 following Kath's passing. Mike devoted over 65 years to the game of basketball as a player, administrator, coach, and referee. He played competitive basketball from 1932 in the Sunday School League until he hung up his sneakers in 1979. Between 1945 and 1954, he was with the University of Manitoba Bisons, the Varsity Grads and the Winnipeg Paulins who won the Canadian Senior Men's Championship and placed fourth in the World Cup Games in Rio de Janeiro in 1954. He is the only inductee of the Manitoba Basketball Hall of Fame in all three categories: Team Member of Winnipeg Paulins in 1983, Athlete in 1985 and a Builder in 2009. He is survived by his three children, Sue (Doug) Scott of Regina, Cathy of Winnipeg and James (Mary) of West Vancouver and five grandchildren, Kelly, Ainsley, Chelsea, Kristen, Sydney and great-grandson Zachary Ross (Ainsley). He is also survived by sisters, Nellie Balayewich of Vancouver and Margaret Eagle of Edmonton as well as many nieces and nephews. A Celebration of Life Service will be held at Thomson In the Park , 1291 McGillivray Blvd, Winnipeg, Manitoba on Saturday, January 21, 2012 at 11:00 a.m. followed by a reception. Donations in lieu of flowers can be made to the Manitoba Basketball Hall of Fame, Basketball Manitoba Inc. 145 Pacific Avenue, Winnipeg, Manitoba, R3B 2Z6. Phone: 204-925-5775 or online at www.mbhof.com