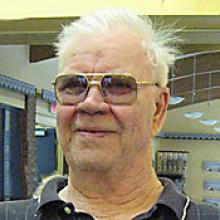 EDWARD ALLAN (BUD) GIBSON Allan passed away Friday, January 6, 2012, at the Carman Memorial Hospital. He was 79 years of age. He was predeceased by his loving wife, Beryl; his father, Edward; his mother, Elizabeth; his sister Evelyn Webber and her husband, Bob; and by his brother-in-law, Reg Arnett. He leaves to mourn his passing, his sister Hazel Arnett of Tampa Florida; his nephew, Dennis Webber (Margaret) of Carman, Manitoba; and his great nephew, Chris Webber of Carman, Manitoba. Also left to mourn are numerous cousins on his father and mother's side, as well as very close friends and their families, both young and old. Allan was born November 30, 1932, at the family farm north of Culross; a little brother for his two older sisters to spoil. He attended school at Giltedge and the later in Elm Creek. Beryl and Allan met during high school and were married in 1957. Allan began his working life with MTS, but after a few years he returned to the family farm. For over 30 years Allan drove the school bus for the Midland School Division, and there wasn't a better organized or cleaner bus in the division. He was firm, and the students recognized it and respected him for it. Allan was involved in many aspects of the community. He spent several years on the local cemetery board and was always involved in the community celebrations such as the annual Canada Day Parade. He was a diligent worker on the community hall board and received his life membership plaque in 2009. Allan was also very involved with the organizing of the Toy Shows which were hosted in the community hall for many years. Vintage cars were a passion of Allan's. He belonged to the Wheels Car Club for several years and he enjoyed the camaraderie of this group. There were many people in the area that were lucky enough to purchase one of Allan's cars at his auction sale. Allan was a friend to all and he was always willing to help if he possibly could. He will be sorely missed. We would like to thank the friends and family who willingly gave their time to take Allan to medical appointments and to visit him both at home and in Boyne Lodge. We would also like to extend our appreciation to the staff at Boyne Lodge and Carman Memorial Hospital for their excellent care, and to Doyles Funeral Home for their help and understanding. The funeral service will be held on Saturday, January 14, 2012, at 11:00 a.m. at the Elm Creek Community Hall. Interment will be at the Elm Creek Cemetery. Memorial donations may be made to the Pembina Valley Humane Society. Doyle's Funeral Home in care of arrangements www.doylesfuneralchapel.com