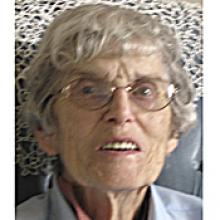 TENA LOEPPKY (nee DYCK) April 10, 1928 - January 9, 2012 It is with deep sadness that we share the passing of our mother, grandmother and great- grandmother, Tena. She passed away on January 9, 2012 at the Poseidon Care Centre in Winnipeg at the age of 83. Tena was born in McMahon, SK where she lived with her parents and six siblings until moving to Stuartburn, MB. It was while living in Stuartburn that Tena met and married Ed Loeppky in 1951. Tena and Ed had four children and lived in Stuartburn and Winnipeg before moving to Gardenton, MB to run a general store. Tena lived in Gardenton until she moved back to Winnipeg after her 80th birthday. Tena was always happy to spend time with her six grandchildren. She spent time reading, puzzling and playing the piano. Tena was an active member of the Stuartburn Gospel Chapel for many years prior to her moving to back to Winnipeg. Tena was preceded in death by her husband of 43 years, Ed. Tena is lovingly remembered by her family; daughters Lynda, Noelle (Larry) and sons Nathan (Debbie) and Don (Chris) and by her grandchildren Stephanie, Jordan, Amber, Dallas, Jason and Chad and great-grandson Josiah. Viewing will take place at Vita Funeral Home on Friday, January 13 at 7:00 p.m. The funeral will be held at the Stuartburn Gospel Chapel on Saturday, January 14 at 2:00 p.m. Burial to follow at the Grace Cemetery. The family wishes to extend a sincere thank you to the staff at Poseidon Care Centre for the care given to our mother, grandmother and great-grandmother in her final months. Funeral Arrangements by: Vita Funeral Home 256 Railway Avenue Vita, Manitoba Phone 1-204-425-3114