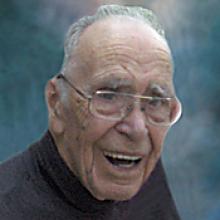 HUGH MCKAY LAUGHLIN January 8, 1919 - January 12, 2012 Hugh McKay Laughlin, of Cartwright Manitoba, died peacefully on Thursday, January, 12, 2012, at the Davidson Memorial Health Centre in Cartwright, with his daughters at his side. Born and raised in Cartwright, Hugh was predeceased by his beloved wife, Gwendolyn, in 1992; his brothers, Angus and Donovan, his sister, Margaret and niece Wendy. He leaves to cherish his memory daughters, Linda McIntosh (Donald) and Leyah McFadyen (Ralph); grandchildren, Barbara Trawon (Emmanuel), Hugh McFadyen (Jennifer), Douglas McIntosh, Ian McFadyen and Scott McFadyen (Mary Beth); great-grandchildren, Rachael McFadyen, James McFadyen and Daniel McFadyen; sisters-in-law, Jean Laughlin and Adrienne Dawes; brother-in-law, Robert Hopper (Noreen); and much loved nieces and nephews, Susan Walker (Tim), Cory Laughlin (Scott), Bonnie Orthner (Barry) and Barry Laughlin. Hugh had a distinguished career in the Royal Canadian Air Force, enlisting prior to the Second World War and retiring as a Squadron Leader in 1968. During the war Hugh was a flight instructor training pilots from all Commonwealth countries. He was the pilot selected to fly Count Bernadotte to the Peace Treaty negotiations in 1945, and to accompany him to the negotiating table. Later in his military career, Hugh was responsible for air traffic control, receiving official recognition for his contributions to Air Traffic safety. He concluded his service as the head of Search and Rescue for western Canada, operating out of Air Command Headquarters in Winnipeg. After his retirement from the Air Force, Hugh maintained ties to the military through the Royal Canadian Legion. Hugh's love for the Canadian prairies and nature was lifelong. His cottage at Rock Lake in the Pembina River Valley provided, and continues to provide, great pleasure for his whole family. Hugh was known and loved for his generous and kindly ways, his gentle and peaceful approach to life. He was a role model for all who knew him. He and his family were committed to public service in a variety of ways, most notable being the fact that his grandfather, father, daughter and grandson all were elected to the Legislative Assembly of Manitoba. Hugh was a lifelong Anglican and a member of Christ Church Anglican in Cartwright. The family is grateful to all of those who cared for Hugh at the Davidson Memorial Health Centre and expresses deep and sincere appreciation to the staff members for their dedication and devotion. A memorial service in honour of Hugh's life will be held at Christ Church Anglican in Cartwright on Sunday, January 29 at 2:30 p.m., with Father Peter van der Lee Lei officiating. Should friends and family desire, donations in memory of Hugh McKay Laughlin can be made to Christ Church Anglican, c/o Pat Ganske, Cartwright, Manitoba, R0K 0L0, or Transplant Manitoba, Gift of Life, Health Sciences Centre, 820 Sherbrook Street, Winnipeg Manitoba, R3A 1R9. For those who wish to sign the online Guest Book please visit our website. Chapel Lawn www.chapellawn.mb.ca 885-9715