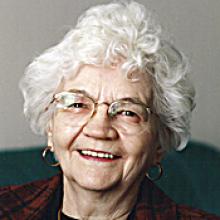 BERTA RUTH WESSLER 1918 - 2012 Berta Ruth Wessler passed away peacefully on Tuesday evening, January 17, 2012 at West Park Manor in Winnipeg. She was 93 years old. Berta was predeceased in 1991 by her beloved husband, Clarence, infant son, Douglas John, and all her sisters, brothers, sisters-in-law and brothers-in-law: Maude Curry (John), Daisy Brown (Neil), Minnie Lumgair (Wallace), Edith ( Dot ) Hodgson (Earl), George Hunt (Kay), Charles Hunt, Ed Wessler (Chris), Clara Wood (Arnold), and many other dear family members and friends. Berta is survived by daughter, Lynn Zacharias (Helmut) of Fort Wayne, Indiana and daughter, Judy Wessler (Richard Donatone) of Los Angeles, California and her many nieces, nephews and friends. Berta was born to Emma and George Hunt, the youngest of seven children and spent her childhood in the Thornhill area growing up on the farm where she enjoyed riding her horse, playing with the kittens, hiking, skiing and sledding through the ravines. Berta's life always revolved around family and her friends who inevitably became like family. Berta left the Thornhill area to work in Morden where she met her true love, Clarence. They were married in 1941, raised their two daughters in Morden and Morris and settled in Winnipeg in their later years. They created a cozy, welcoming home filled with love and laughter, good food and get-togethers with family and friends. They took frequent trips to visit Lynn and Helmut in Germany, Ontario and Indiana, and Judy in Los Angeles. They were an inseparable couple until Clarence's death in 1991. Berta was a caring, compassionate woman who never faltered in her love and devotion to family and friends. As she struggled with ill health and progressive memory loss, Berta maintained her independence to the best of her ability. We will miss her indomitable spirit in our world but our memories of the bright, witty, stubborn, gentle lady she was will live on. A private graveside service took place at Hillside Cemetery in Morden. A memorial service honouring Berta's life will be held at Trinity United Church, 933 Summerside Ave. in Winnipeg on Friday, January 20, 2012 at 2:00 p.m. We give special thanks to nieces, Dorothy Tjaden (Berta's Winnipeg daughter ), Jean Carruthers, Elsie Bergen, Marg Wyllie whose visits, phone calls, cards, and outpouring of love and support have been a constant in Berta's life; to Wendy Cathcart, Berta's dear roommate and devoted friend during her years at West Park Manor; to Mary Klassen, Berta's caring companion over the last months; to all the staff at West Park Manor for the excellent care they provided, the wonderful activities Berta so enjoyed and the tender comfort at the end; to the nurses and doctors at the Grace Hospital who gently cared for Berta during her recent hospitalization; to Rev. Milly Malavsky and Trinity United Church; and to all the people who touched Berta's life in countless ways and who meant so much to her throughout her life. In lieu of flowers, donations may be made to the Canadian National Institute for the Blind, 1080 Portage Avenue, Winnipeg, MB R3G 3M3 or to West Park Personal Care Home, 3199 Grant Avenue, Winnipeg, MB R3R 1X2. Wiebe Funeral Chapel, Morden In care of arrangements, 822-4755 www.wiebefuneralhomes.com