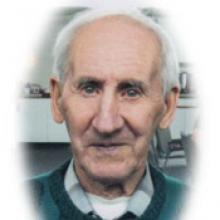 WILLIAM BALLEN June 17, 1927- January 22, 2012 On January 22, 2012, Bill passed away at Red River Lodge in Morris, Manitoba. He was born in Carlowrie, Manitoba on June 17, 1927. Bill was predeceased by his parents, Moysej and Maria. Brothers, Peter and John; sisters, Anna, Pauline, Anastasia, Natalie, Victoria and Melinda; sisters-in-law, Gloria and Kathleen; and brothers-in-law, Fred, Ernest, Jack and Peter. He is survived by his brothers, Steve and Nestor; sister-in-law Lena and numerous nieces and nephews and their families. William lived and grain farmed in the Carlowrie area until his retirement in 2002. In the fall of 2005, he had a farm auction and fully retired. He lived on the original homestead until 2002. In 1981, he built a new home on the same yard site. In 2002, he purchased a home in St. Malo, Manitoba and rented out the farmland and spent his time between his two homes. William helped to build the dam and lake to create St. Malo Provincial Park. From 1944 to the 1950s, he worked in the bush camps in Ontario and also continued to farm in Carlowrie. His love of sports included playing pool, shuffleboard, baseball and curling. Bill played team hardball in summers for 21 years. In the winters he curled from 1947 to 2002 and won many curling prizes and trophies during this time. He also enjoyed the dances in the local community and surrounding areas. He also enjoyed watching sports on TV and listening to hockey and baseball games on the radio. Bill liked to go to the local community centre and school yard to watch the games played by the adults and children in the community. He enjoyed fishing and hunting deer and moose. A favourite outing was to pick berries: saskatoons, strawberries and blueberries. One of his favourite pastimes was playing cards with family and friends; poker, King Peter, 7 up, Hola and cribbage, to name a few. Since 2008, he resided at Red River Valley Lodge in Morris, Manitoba. We the family would like to express heartfelt thanks to the staff for the care that was provided for Bill. Funeral service will be held on Saturday, January 28, 2012, 10:30 a.m. at Rosa Ukrainian Catholic Church, Rosa, Manitoba. Pallbearers will be his nephews. Interment will follow the service in the church cemetery. Arrangements by Vita Funeral Home, 256 Railway Avenue, Vita, Manitoba (204) 425-3114