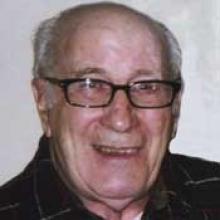 FRANK JOSEPH ROGERS 1919 - 2012 Frank Rogers passed away peacefully on Monday, January 23, 2012 at Boundary Trails Health Centre at the age of 92. Frank was born in Winnipeg, MB on September 20, 1919 one of eight children of Alphonso and Ramona Rogers. Frank joined the Canadian Army in 1940 and was a member of the 15th Light Anti-Aircraft battery. He initially trained in Winnipeg and was sent overseas in the fall of 1940. He was stationed in several towns throughout southern England to defend the coastline from aerial attack. He was deployed to France and was injured in battle. He was proud of his wartime service, however after returning home he became a champion for peace. After his service duty he returned to Canada and was employed by the CN Railroad. He married Rose Krul in 1946. In October 1956 they immigrated to Minneapolis, MN and resided there till 1986. While living in Minneapolis, Frank worked for the Soo Line Railroad and made homes in Brooklyn Center and Osseo, Minnesota. Frank raised pigeons as a boy in Winnipeg and took great pride in renewing his love of pigeon racing in Minnesota. Frank's birds were recognized nationwide, winning many long distance races earning Frank many trophies and recognition. Frank's birds were also sought after for breeding. His love of animals also reached to dogs, especially the Boston bulldog breed. Frank and Rose loved their bulldogs, Mike I, Mike II, Amy and Buttons. They also adopted neighbour's dogs in the absence of owning their own as they aged. In 1986 Frank and Rose retired and moved back to Morden to be near some family and friends and enjoyed life here for the last 26 years. Frank continued raising and racing pigeons until declining health prevented him from continuing. Frank is survived by his wife of 65 years, Rose, sister, Angela Gallop of Winnipeg, sisters-in-law, Doris Ross of Ontario, Kathy Outhouse of New Brunswick, Margaret Kellner of Winnipeg and Millie Bayliss of Morden. He is also survived by niece, Denise (Vern) Bender, their children, Drew, Cole and Bret, Norma Sanders, her children, JoAnne (Jason Howden) Sanders, great-niece, Madisyn, Heather Sanders, Michael (Janene Shearer) Sanders, David Ross, Ontario, June Scott, Brian Gorden, plus many other nieces and nephews. Frank is also survived by special friend, Derek Helps. Frank is preceded in death by his parents, Alphonso and Ramona, siblings, Joseph Rogers, Rose Binnie, Connie Stern, Terry Rogers, Paul Rogers, Edith Davey, nephew, Michael Sanders and brothers/sisters-in-law on Rose's side of the family. A memorial service will be held Saturday, January 28, 2012 at 11:00 a.m., at Wiebe Funeral Chapel, 1050 Thornhill St. in Morden with interment at a later date. In lieu of flowers, memorial donations are preferred and may be made to the Pembina Valley Humane Society, 462 Jefferson St., Morden, MB R6M 0C3. The family would like to thank Dr. Bob and the staff at the medical clinic, the home care providers, the staff at Boundary Trails Health Centre, nurse Dorothy in the ICU, Eileen Penner and all medical personnel involved for their care and attention to Frank in recent years. Many thanks to all of Frank and Rose's neighbours who without them, Frank and Rose's care would not be possible. Wiebe Funeral Chapel, Morden In care of arrangements, 822-4755 www.wiebefuneralhomes.com