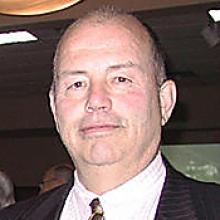 DOUGLAS (DOUG) GORDON MACIVER February 20, 1953 - January 26, 2012 Doug played his last down on Thursday, January 26, 2012. Throughout his life he gained lots of yardage and seldom was offside. Anyone that played the game of life with Doug was the richer for knowing him. Whether you played with him or, heaven forbid, against him, you felt the impact. Left to mourn is his loving wife, Evelyn, of 32 years; devoted children, Douglas (Meagan), Andrew, and Alexandria; his brothers, Sandy (Terri Roese) and Ian (Wendy McLay); sisters, Laura-Leigh (Jim) Brook, Tracy (Herb) van der Ende, Kim (David) Turnley, and Jackie (Mike) Dragojevi; in-laws Sharon (Paul) Millar, Helene Robinson, Bill (Cheryl) Robinson and Pat (Gord) Naulls. He was also a very special uncle to numerous nieces and nephews too many to mention by name. Doug was truly a product of Manitoba. Alumni of Windsor Park Collegiate and the University of Manitoba, Doug double majored in philosophy and psychology (1972 to 1976). His distinguished football career began in Winnipeg with the St. Vital Mustangs and the University of Manitoba Bisons. Doug played for nine years in the CFL starting with the Toronto Argonauts (three years) and the Saskatchewan Roughriders (three years). As so often happened in his life, Doug returned to Manitoba in 1982, to play his last three seasons with the Winnipeg Blue Bombers, retiring after their Grey Cup victory in November of 1984. Doug was inducted (as part of the 1984 Winnipeg Blue Bombers) into the Manitoba Sports Hall of Fame in 2010. Since the late 1970s, Doug's success in the auto industry birthed a lifelong loyalty. Beginning his career under his Dad, Jack MacIver, at Winnipeg's Midway Chrysler, Doug's ambition landed him in Toronto where he would soon purchase and manage two dealerships of his own (Willowdale Dodge and York Volkswagon), leading to great success. In the 1990s, Doug was the largest Chrysler dealer in the country (by volume). Then, in 2003, as a testament to his commitment to family, Doug moved back to Winnipeg to help oversee Midway until the sale of the company in 2007. He has since founded the Winnipeg based company Ride Time (formerly CanadaWide Vehicle Finance Ltd.), opening two locations in four years with a third location to open shortly. Daily operation of the business will be carried on by Doug's wife, Evelyn, and his two sons, Andrew and Doug Jr. In the past year Doug got to celebrate Windsor Park's 50th and three family reunions, which included an early Christmas celebration in December 2011. Doug's sparkle in his eye, smile on his face, keen sense of humour and a welcome hand extended to all, made him a larger than life presence which filled a room wherever he went. His size belied his gentle soul: 12 days prior to his passing, Douglas's speech at the wedding of nephew, Ryan Brook, concluded with, just never go to bed angry. The main theme of Doug's life was dedicationdedication to his sport, dedication to the car industry, and finally, but for him most importantly, dedication to his family. For all that knew him, they knew it was all or nothing. With all of Doug's achievements the one he was most proud of was his family. He was a world traveler and has been on every continent except the Antarctic. Doug MacIver was involved with numerous charities, including: Athletes In Action, the Winnipeg Rotary Club, the Winnipeg Police Association, and the North American/Scandinavian Exchange Program. Doug also paid forward his expertise in football, coaching amateur football for the Winnipeg Rods where he met his life long friend Mike (Bucky) Buckberrough. A service to celebrate Doug's life will be held at 3:00 p.m., Monday, January 30, 2012, in the Wellington Room at the Victoria Inn, 1808 Wellington Avenue. The service will be webcast live, and can also be viewed anytime after the service. Go to nbardal.mb.ca and follow the link on the main page. In lieu of flowers, please donate to either Variety: the Children's Charity of Manitoba (www.varietymanitoba.com/donations.html) or to the Boston University School of Medicine (CSTE to study the effects of brain injuries on athletes 72 East Concord St., Suite L219, Boston, MA, 02118). Condolences may be sent to condolences@nbardal.mb.ca. NEIL BARDAL FUNERAL CENTRE 949-2200 nbardal.mb.ca