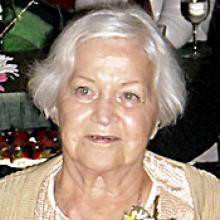 HILDA GUSHULAK We celebrate a life inspired by love and music, of a talented, intelligent, remarkable woman. Hilda Gushulak (Zimmer) passed away peacefully, surrounded by family, on January 31, 2012 at the age of 80. Hilda was born on August 22, 1931 in Grenfell, SK and grew up in rural Manitoba. She attended Angusville High School and was the recipient of the Manitoba Scholarship, awarded to the student who had the highest overall grade average in the province. She graduated from St. Boniface Hospital as a Registered Nurse in 1954 and was the Matron of Erickson Hospital for several years. She married Lawrence Gushulak on May 21, 1960. They moved to Ste. Rose in 1966 where Hilda continued her nursing career. After several years of nursing she retired to raise her four children and work tirelessly for the community as a choir director for the school and countless hours devoted to directing the church choir and teaching Marriage Preparation. Hilda's joy in life came from her family, especially her grandchildren. She will be deeply missed by her husband Lawrence, and her children Katherine, Laura, Barb (John) and Ken (Lisa). Her friendship, love and support will also be missed by her grandchildren Cale, Rieanne and Sidnie. Grandma was, and always will be, their biggest fan. She is survived by her sister Isabel, her brother Will (Gail), her sister-in-law Shirley, and numerous nieces and nephews. Funeral Service for Hilda will be held on Monday, February 6, 2012 at 11:00 a.m. in the Ste. Rose de Lima Roman Catholic Church in Ste. Rose du Lac, MB. Fr. Armand Le Gal, OMI will officiate with the service concluding at the church. In lieu of flowers, memorial donations may be made be to the Salvation Army, one of Hilda's favourite organizations as she believed in feeding those who were hungry and helping anyone who was in need, or to the Dr. Gendreau Memorial Personal Care Home in Ste. Rose du Lac, Manitoba We would also like to thank the staff of the Dr. Gendreau Personal Care Home for the patient and kind care they deliver with humour and compassion everyday, and the hospital staff for their kindness and support in Mom's last days. Sneath-Strilchuk Funeral Services, Ste. Rose Chapel in care of arrangements (204) 447-2444, www.sneathstrilchuk.com