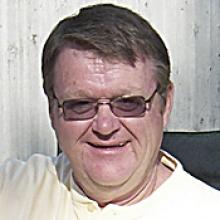 JAMES (JIM) THOMAS FINUCANE Jim Finucane passed away unexpectedly just before 12:00 noon on Tuesday, January 10, 2012, at the age of 64 years, in Flin Flon, MB. Jim will be lovingly remembered by his Eileen (Senkow Morran), the Senkow family who accepted him as a brother - David and Barb of Regina, SK, Bob and Sandra of Lockport, MB, Don and Tammy of St. Andrews, MB, Fred and Shelley of Seven Sisters, MB, Deann and Jeff Lane of Selkirk, MB; nieces Jennifer and Omar Farooq of Dubai and Krista Senkow of Winnipeg, MB; nephews Matt and Christine Senkow and daughter Alexa of Iqaluit, NU, Donnie Senkow of Winnipeg, MB, Gareth Senkow of Seven Sisters, MB, Greg and Mike Lane of Selkirk, MB; Aunt Thelma Sadowick and Uncle Gordon Talbot both of Prince George, BC, as well as numerous cousins and friends across the country. Jimmy was predeceased by his parents Jack and Leona Finucane, and Eileen's parents Bill and Muriel Senkow. Jim, the only child of Jack and Leona Finucane, was born on September 28, 1947. He lived in Flin Flon his whole life and was always proud to say that he grew up in the Mile 84 area. Jim was employed at Hudson Bay Mining and Smelting as an instrument mechanic from 1966 to 2002 and was an active member of the Flin Flon Volunteer Fire Department from 1976 to 1991. In retirement Jim worked at Alexander's Auto Ranch car lining and at times driving the delivery truck and tow truck. In 2006 a lifelong dream was fulfilled when Jim went back to school to obtain a Class 1 driver's licence and experience driving the semis. Many trips were made with his friend George to British Columbia and he most recently drove some solo lime trips for Northern Bulk. Retirement wasn't all work for Jim; a Western Caribbean cruise, winter trips to Mexico, Kelowna, Australia, New Zealand, and Arizona were travel highlights that he and Eileen shared. As much as he enjoyed these get-aways Jim always looked forward to coming home to the lake and his friends. Funeral services were held Monday, January 16, 2012 at St. Ann's Roman Catholic Church in Flin Flon, MB with Father Paul Bringleson officiating. Thank you Father Paul; the service was just right - short, sweet, and simple but so meaningful! Memories of Jim were shared by my brother, Bob Senkow; thank you, Bob, it was just as I wanted. Soloist Carol Craig shared her beautiful voice; thank you for the gift of song. Thank you as well to the Active Pallbearers: Dave Broughton, Randy McLaren, Don Wikander, Donnie Senkow, Greg Lane, and Dayle Neufeld. Thank you to Bob Harvie and Lory Neufeld who served as ushers and to the Memorial Attendants: Phyl Broughton, Yvonne Harvie and Audrey Neufeld. Honorary Pallbearers were all of Jim's many friends. Thank you to the past and present members of the Flin Flon Volunteer Fire Department who formed an Honour Guard and to the Legion for their tribute. Thank you to the Emergency Responders and the ER staff who tried their best. Thank you to our friends, Randy and Anne, Phyl and Dave, Audrey and Lory, Yvonne and Bob who were by my side doing what was needed right from the start. I will never be able to fully express my gratitude for your friendship and caring. Thank you to the family and friends who travelled through terrible road conditions to be here and to those who could not be here but were with us in thought. Thank you for the many calls and messages of support whether by phone, card, email or online. They were all so comforting. Thank you to all those who visited our home, sent floral tributes, brought or sent food, and for the meals provided and to those who organized those meals. Thank you to St. Ann's C.W.L. for the lunch after the service. To Jim's friends who grew up together in Mile 84 thank you so much for the beautiful floral tribute. Thank you for the donations that have been made in Jim's memory. Thank you to Darren, Rhonda, and most of all Dana - you have made a difficult time so much more bearable. Thank you to this special community - your support has been tremendous as I go through this journey and my family has gone home knowing that I'll be looked after. Eileen If friends so desire memorials tributes may be made to the local Automatic External Heart Defibrillator (AED) Fund that has been set up in Jim's memory, cheques payable to Anne McLaren, 241 Dadson Row, Flin Flon, MB R8A 1P7; the Heart and Stroke Foundation of Canada, or the Canadian Diabetes Association.