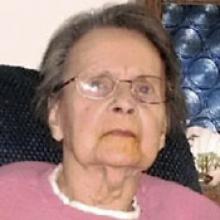 MARJORIE ELMIRA WILSON WILLIAMS (nee BENNETT) October 9, 1924 February 3, 2012 We are sad to announce the passing of Marjorie Elmira Williams on February 3, 2012 at the Selkirk General Hospital. Mom grew up on the family farm with her parents Chester and Martha Bennett of McCreary, MB and her 11 brothers and sisters. She is predeceased by her brothers Delmore, Gilmore, Elmore, Ruben, Bill, Wesley and sisters Flora, Cora, Lillian and Ruby. Her twin sister Margaret Jennings of Eden, MB, and her sisters-in-law Yvonne Bennett of McCreary and Jeannette Bennett of Dauphin survive Mom. On October 18, 1944 Mom married Leslie Wilson of Ochre River, MB and they had two children. They lived in Winnipeg for 17 years before returning to farming in Makinak, MB. Dad died on November 2, 1980, just after the move to Balmoral, MB. Mom leaves to cherish her memory, her son Gerald (Elaine) Wilson of Chemainus, BC, grandchildren Mark (Leanne) Wilson of Brisbane, AU, Michelle Wilson of Brisbane, AU, and daughter Elaine (Mel) Harrison of Balmoral, MB, grandchildren Rhonda (Al) Potter of Ottawa, ON, Leanne (Sean) Forbes of Gainesville, Florida and Darryl (Melissa) of Melbourne, AU. She also leaves her great-grandchildren Melissa, Mya, Kiera, Spencer, Zachary, Jullian and Marie. After spending a few years living in Balmoral, MB, Mom married George Edger Williams of Winnipeg on May 19, 1990 and moved to Winnipeg. They had only a little more than a year of their happy time together before George passed away suddenly on September 12, 1991. George and Mom are survived by his children Veldine (Ed) Debeuckelaere of Warren MB, Dennis of Winnipeg, MB, Iris (Clyde) Loeb of East St. Paul, MB, and grandchildren Sean, Tricia, Jay, Jason, Chris, Cameron and Jordan. Mom spent her remaining years in Stonewall, MB. Mom was a kind and thoughtful person whose life had many joys as well as a few hardships along the way. She loved and took pride in her family. Her gardens, flowers, berry picking, knitting, needlework, and Wordsearch Books were a constant pleasure to her throughout her life. Mom was always ready for a good game of cards or a bingo game. A special thanks to Dr. Venter, Stonewall Medical Group, who pulled Mom through some tough times, the Home Care Services and the home care workers who helped make Mom's last years easier. There will be a Celebration Of Life service at the McCreary Legion Hall, McCreary, Manitoba, at 2:00 p.m. on February 22, 2012. Dobchuk Funeral Home McCreary, Manitoba Telephone (204) 835-2004
Publish Date: Feb 18, 2012
MARJORIE ELMIRA WILSON WILLIAMS (nee BENNETT) October 9, 1924 - February 3, 2012 Marjorie Williams of Stonewall, MB, and formerly of McCreary, passed away quietly at the Selkirk General Hospital. A service will be held later this month with more information to follow. Dobchuk Funeral Home McCreary, Manitoba Telephone (204) 835-2004
Publish Date: Feb 6, 2012