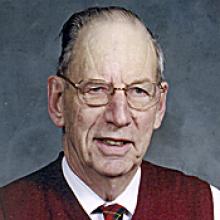 HERBERT LEONARD GILLIES June 1, 1926 - January 27, 2012 With great sadness we announce the sudden passing of Herbert Gillies, at Lakeside Nursing Home, Wolseley, Saskatchewan, at the age of 85 years. Left to cherish his memory are his second wife Joyce, of five years, his son David (Carol) daughters, June (Gary), Janet (Stuart), stepdaughter Sharon (Richard), grandchildren Robert (Tanya), Jason (Michelle), Katie (Jason), step-grandchildren Kim (Jim), Stacey and Cindy (Kent), brother Don (Bernice), sister Margaret, and Joyce's extended family. Herb was born and raised on a farm near Inglis, Manitoba. In 1943 he started work with the C.P.R. in Inglis as a student telegrapher. In 1944 he enlisted with the Royal Canadian Navy and evacuated P.O.W. camps around Hong Kong. He was discharged in 1946 and returned to work with the C.P.R. as an assistant agent and telegrapher. He married Joyce Hardy in 1948. His work with the C.P.R. transferred him to many different towns but in 1953 he became the agent at Stony Mountain and stayed for 12 years. He and Joyce were active in the United Church and community service. In 1965, as C.P.R. agencies were being closed, he was transferred to Winnipeg, Regina, and Thunder Bay. His title and job were changed also, Chief Clerk of Marketing and Sales, Sales Representative, District Manager and finally, in 1982 Coordinator of Freight Services. He retired in 1984 and they built a house on the Hardy homestead near Inglis. He and Joyce enjoyed country living, until 1999 when Joyce passed away. Throughout all his moves, Herb kept active in several service organizations: The Masonic Lodge, Wa Wa Temple, Moosomin, Khartum Temple, Dauphin Shrine Club, Scottish Rite, Order of the Eastern Star, and the Legion. In 2006, at the age of 80, he married Joyce Mills (Ranson) and they resided in Moosomin, Saskatchewan until he was assessed for long term care in November 2011. We would like to thank the staff of the Moosomin Hospital, Wolseley Hospital and Lakeside Nursing Home. Also thank you to the Moosomin Home Care workers and Meals on Wheels volunteers. The funeral service will be held on Saturday, February 18, 2012 at 10:30 a.m. at the Bethel United Church, Moosomin, Saskatchewan with interment to follow in the Asessippi Cemetery, Inglis, Manitoba at 4:00 p.m. Cremation has taken place. In lieu of flowers donations may be made to the Canadian Cancer Society. Remembrances and condolences can be emailed to braendlebruce@mymts.net Braendle-Bruce Funeral Service of Russell, Manitoba in care of arrangements. (204) 773-2747