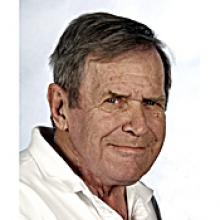 TERRY BASTABLE We are sad to announce that Terry passed away unexpectedly on Tuesday, February 7, 2012 at the Rockyview Hospital in Calgary, Alberta. He will be lovingly remembered by wife Jackie (nee) Chandler, sons, Vern (Tammy), Brett (Judi) and grandchildren, Dylan, Tomas, Sean and Megan: sisters Sandra (Zane) Lewkiw and Liz (Garry) Cullingham, as well as numerous nieces, nephews, cousins and friends. Terry was predeceased by his parents Vernon and Phyllis and a half sister Judy (Bob) Campbell. Terry was born in Winnipeg on May 22, 1939. He was raised and went to school in St. James and graduated from the University of Manitoba and lived here until his career opportunities took him to Toronto, Edmonton, Vancouver and Calgary. He and Jackie had retired to Turner Valley, Alberta where he was living at the time of his death. Cremation has taken place and at Terry's request there will be no funeral service.