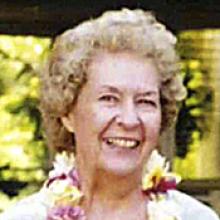 ANNA LANE BEAL Anna Lane Beal, our beloved mother, grandmother, great-grandmother, sister and aunt passed away at the McCreary Personal Care Home on Monday, February 20, 2012, at the age of 86. Anna is survived by her son David Beal of Winnipeg; daughter Michelle (John) Boerchers of Laurier, Manitoba; and grandchildren, John Floyde (Carla); Jennifer (Robert) Dyck, children Kiera and Caitlin; Sarah (Kevin) Myson, children Genavieve and Emaley; sister Joan (Bruce) Lorimer; brother in law Evan Davies; numerous nieces and nephews. Anna was predeceased by son Richard in 1977 and by her loving husband Tom Beal in 1992. Anna was born to Marie and Michael Dick on June 10, 1925, in Moose Jaw, Saskatchewan and grew up in Drinkwater, Saskatchewan. Anna was the second of four daughters. She became a Royal Conservatory of Music piano teacher and her love of music remained throughout her life. Anna graduated as a Registered Nurse from Misrecordia School of Nursing. She loved her career and made lifelong friendships. Anna met and married, the love of her life, Tom Beal. God blessed them with three children and Anna took leave of her nursing career to raise her family with love and care. Anna returned to work as a nurse, at Heritage Lodge Nursing Home in Winnipeg, for many years until her retirement. Her grandchildren held a special spot in her heart and Anna would do anything for them. Upon retirement Anna and Tom spent their time at their cottage where she found joy in gardening, knitting for her family, crossword puzzles and a good game of scrabble. Anna's health declined and in July 2002 she became a resident of McCreary Personal Care Home. The family will cherish her spirit and hold onto the many fond memories they have of her. The family expresses deep gratitude for the loving care given Anna over the many years. She became a part of the Nursing Home family and was given respect and dignity. Funeral Service will be held on Saturday, March 3 at 2:00 p.m. at McCreary Gospel Church with Pastor Roger Woywoda officiating. Interment will take place at Chapel Lawn Cemetery, Winnipeg. Dobchuk Funeral Home McCreary, Manitoba Telephone (204) 835-2004 The heritage of Neill, Dobchuk and Anderson providing over a century of service.