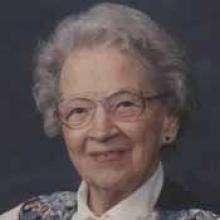 GENEVIEVE EVANGELINE (EVA) MARSHALL (nee FORESMAN) 1920 - 2012 On Saturday, March 3, 2012, at Boundary Trails Health Centre, Eva Marshall aged 91 years formerly of Morden, MB, and formerly of Brandon, MB, went to her eternal rest. She leaves to mourn her passing four sons, Bob and Karen of Birtle, Bill and Agnes of Swan River, Rick and Joyce of Victoria, B.C., Jim and Joanne of Regina, SK, as well as five grandchildren and six great-grandchildren. She was predeceased by her husband, Henry Marshall, in 1994, a son-in-law in 1993, one sister and two brothers. Funeral service will be held on Friday, March 9, 2012, at 2:00 p.m. at St. Paul's United Church, 353 Thornhill St., in Morden with interment at Hillside Cemetery. Donations may be made in Eva's memory to either the Boundary Trails Health Centre Foundation or the Morden Friendship Centre, both available at the church. Wiebe Funeral Chapel, Morden In care of arrangements, 822-4755 www.wiebefuneralhomes.com