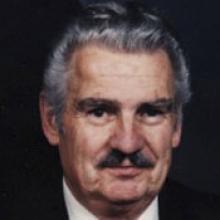 HERBERT NEMISH With his loving family surrounding him, our beloved Herb passed away peacefully on March 3, 2012 at the age of 89. He will be remembered by his wife of 58 years, Rita; children Greg (Randa), Chris (Lynda), Mark (Tammy); his two grandchildren, Kendall and Kailani; his sister-in-law Aline, and his many nieces and nephews. He was predeceased by his parents Katherine and Eugene; his brothers Ernest (Geni), Eugene, and sister Marjorie. Herb graduated from the University of Manitoba and then embarked on a teaching career in Winnipeg School Division #1 for more than 30 years. He was well respected as a teacher, principal and administrator and was actively involved in coaching soccer and volleyball. Herb was a devoted member of Trinity Lutheran Church where he led the church choir in addition to being an active member of the church council. Possessing a beautiful bass-baritone voice, Herb had a passion for classical music and frequented many W.S.O. concerts. After his retirement in 1983, Herb and Rita embarked on many vacation trips. His love for baseball and hockey also led Herb and Rita on travels to see their favourite teams. After spending 55 years in their home, Herb and Rita moved to Sterling House, a retirement residence. While residing there for nearly two years, Herb and Rita have made many beautiful friends and lasting memories. His role in the Sterling House choir was very special for Herb. The family wishes to thank Dr. R. Heyday for his long time care in addition to Dr. K. Cavers and the staff at Victoria General Hospital for their recent support of Herb. Further thanks are extended to Pastor Ron Nelson for his spiritual help of the Nemish family. Funeral services will be held on Thursday, March 8 at 10:00 a.m. at Glen Eden Funeral Home at 4477 Main Street, West St. Paul, MB; reception to follow at Glen Eden. In lieu of flowers, a donation can be made to the Parkinson's Society of Manitoba. Glen Eden Funeral Home 338-7111 www.gleneden-mb.ca