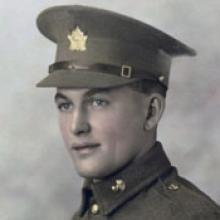 GEORGE LOUNT COUTTS 1916 - 2012 George Lount Coutts is at a well-earned rest. In his 96th year, George passed away peacefully on Monday, March 19, 2012, with the last check mark placed beside his considerable list of things to do.' His service took place Thursday, March 22, 2012, at the Melita Legion Hall and he is interred at the Melita Cemetery. George served his country with pride. With the Winnipeg Grenadiers, he was taken prisoner at the doomed defense of Hong Kong during the Second World War. He was honoured by King and Country for gallant and distinguished service during four years in prison camp credited with saving the lives of many of his comrades during those terrible years. He served whichever community he lived in when duty called for municipal council, school board, hospital board, and many other such committeeswilling and able to help make the difficult decisions demanded of local leadership. He served his family best of all by providing an example of how a man should live his life. And his family grew as the years passed, as he became father and grandfather to the extended community who knew him as a man to love and respect. He was a loving husband to Margaret and Mona for a total of 68 years. He was a loving father to Larry, Resby, Francis, and Bruceproviding guidance by his words but more often by his actions. He was a loving grandfather and great-grandfather (directly) to 20but to many, many more than that when he extended his love and affection to every child in his acquaintance. HE SERVED WELL HIS COUNTRY ** HIS COMMUNITY ** HIS FAMILY And now he is at rest! Tribute donations to the memory of George L. Coutts can be made to The War Amps of Canada, 2827 Riverside Drive, Ottawa, ON, K1A 0C4, Melita Palliative Care Fund, Box 459, Melita, MB, R0M 1L0; Curling For Life Endowment Fund, c/o The Winnipeg Foundation, 1350-One Lombard Place, Winnipeg, MB, R3B 0X3 or to any charity which has significance for you. Arrangements in care of Redpath Funeral Home - Melita (522-3361) Neil Redpath Kurt Ardron - Directors. To send condolences or special memories to the family, please visit: www.redpathfuneralhome.com