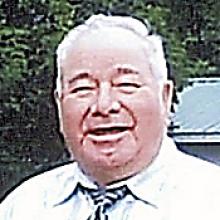 MAURICE RICHARD May 1, 1934 - April 5, 2012 It is with deep sadness that we announce the sudden passing of our dear father, grandfather, great-grandfather, brother and uncle on April 5, 2012 at his home in Camperville, Manitoba at the age of 77. Dad was predeceased by his wife and our mother, Melanie, his father Napoleon, his mother Philomene, his grandson Andre, his stepmother Agnes Richard, his brothers Harry Beauchamp, Augustine Damas, William, Lawrence and Jacob Richard, and his sisters Lizzie Chartrand, Delia Stevenson and Madeline McLeod-Lavallee. Remaining to cherish forever Dad's memory are his son Mark and wife Myrna - their children Mark Jr. and Mandi, Mark Jr.'s wife Leanne and their children Maurice, Lena, Codell and Jordanna; his son Derek and wife Cheryl - their children Stephanie, Michael and Melanie - Stephanie's partner Ben and their children Ethan and Rochelle; his son Randy and partner Paula - Randy's children Danita and Randy Jr. - Danita's partner Stacy and their daughter Chezleigh and Andrew's son Ales. Also surviving, are his sisters Gertrude, Marie, Nora, Lucille, Daisy (Frank), Loretta and his brothers, Bruce, Denis (Rita), Eugene as well as numerous nieces, nephews and extended family. Dad was born on May 1, 1934 at Camperville, MB to Napoleon and Philomene (nee Klyne) Richard. Dad made Camperville his home all of his life, with the exception for the short period of times he left to go out working. Dad was a hard worker as he started at a very early age. He went to the Northwest Territories to summer fish with his brother William (Bill), he was only 15 years old. Not long after, he started working in Brandon, this is where his carpentry career started. In 1954 he met the love of his life, Milly, who he always referred to as Ma. Mom and Dad married in Camperville on December 27, 1958, and this is where they raised their three boys. Always a dedicated family man, Dad revelled in the accomplishments of his sons and their families. Dad was very skilled and talented. He could make just about anything he set his mind to. Whenever one of us needed help, he was always there to lend a helping hand; he was a jack of all trades. He loved the outdoors, along with that love came hunting, fishing, golfing, and his wonderful hobby of maple sapping. The last 15 years of Dad's life were difficult ones after he lost Mom. His gentleness, his sense of humour and his life stories are all cherished memories for the whole family. He will be dearly missed. Prayer service will be held at Our Lady of Seven Sorrows Parish in Camperville, MB on Wednesday, April 11 at 7:00 p.m. The Funeral service will follow on Thursday, April 12 at 10:30 a.m. with interment at Our Lady of Seven Sorrows Cemetery with Fr. Bastin celebrating. Active Pallbearers are Mark Chartrand, Michael Guiboche, Randy Jr. Richard, Brian Richard, Nelson Sutherland, and Robert Chartrand. Maurice's grandchildren are to consider themselves honorary pallbearers. The family would like to thank the Winnipegosis Emergency Medical Unit, The Winnipegosis R.C.M.P. and Mrs. Helen Lafreniere who all showed compassion in his care. In lieu of flowers, donations in Maurice's memory may be made to the Canadian Diabetes Association, CancerCare Manitoba or to the Heart and Stroke Foundation. Sneath - Strilchuk Funeral Services is in care of the arrangements. www.sneathstrilchuk.com