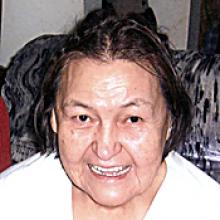 ELIZABETH BEATRICE FONTAINE (nee GUIMOND) June 16, 1928 April 17, 2012 Mothers are a blessing everywhere to their children. But, some mothers have their own uniqueness as well. Such was the case with our mother who became The Mother of Many Children! Elizabeth was born in Sagkeeng First Nation and attended the boarding school at an early age of three years old. She was the daughter of Pauline (nee Courchene) and Xavier Guimond. She was also predeceased by her husband and co-worker Stan Fontaine Sr., in 1997, her children Vivian, Maxine, Anne and Arnold, her sisters Lillian, Marie and her brother Harry. She leaves to mourn her daughters Bertha (Marcel), Irma, Ingrid (John) and Iris, sons Stan Jr. (Ramona), Barry, Derry (Karen) and Darrell, 24 grandchildren, 15 great-grandchildren, sisters Antoinette Boubard, Emily Boulette, Lorraine Morrisseau and Grace Johnson and many relatives. In 1968, Elizabeth finished her upgrading classes at Sagkeeng and moved with the family to Winnipeg in 1969. She got a job with Social Development in 1971-1972 and with the Native Alcoholism Council of Manitoba in 1973, where she worked until her demise. She just missed the 40th anniversary of the Native Addictions Council which was celebrated in March 2012. During her tenure with the Native Addictions Council, Elizabeth became one of the original workers and supervisor/elder of the Pritchard House Treatment Program. During that time period, it is estimated that there were approximately 70,000 clients who had gone through the agency. Many clients and ex-clients have come to know her from across Canada. She was once featured in a documentary entitled, The Mother of Many Children! Elizabeth's main philosophy of life was the Golden Rule, to treat others as we would be treated. For her, the job became more of a sacred responsibility to our fellow human beings. She was prepared to go the extra mile and would often cab it to work in the early morning hours and put in some nine hours each day. The many who knew her espoused her for her strength and kindness. Elizabeth left an indelible mark in the minds and hearts of those who came to know her. Even in her weeks before her demise, she admonished some of her children, Always treat other with respect! Let us do today as she would have us do! Let us be clean as she would have us be; Let us be brave and fine and strong and true; Fulfilling her dreams for you; her dreams for me. Above the gift is the Giver; let us give; The precious substance of our life to make; The world a better place because we live. Let us live worthily for her dear sake. By: Grace Noll Crowell The family wishes to extend it deep appreciation to all for the care given to our mother in her time of need. Thank you kindly. Wake service will be held at Thunderbird House, 715 Main Street, Winnipeg, MB beginning Wednesday, April 18, 2012 at 8:00 p.m. to Friday, April 20, 2012. Funeral service will be held at the Thunderbird House, 715 Main Street, Winnipeg, MB on Friday, April 20, 2012 at 1:00 p.m. Interment will follow at Brookside Cemetery, Winnipeg, Manitoba. Condolences may be sent to the family c/o Spirit Road Funeral Services Inc., PO Box 200, Fort Alexander, Manitoba, R0E 0P0, 204-340-6490 or friends may leave a message of sympathy on the web site of the Omega Funeral Home, www.omegafuneralhome.com.