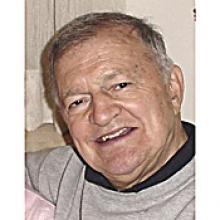 GLENN (KEEPER) MCWHINNEY August 10, 1930 April 14, 2012 It is with profound sadness that we announce the passing of Glenn Simpson McWhinney, loving husband of Lily (Hann); devoted father to Leah (Rheal Dupuis), Jill (Bill Palmer), Paul, Jeffrey (Lisa Laudinsky) and Bruce (Kerry); adoring Grandpa to Hope (seven)- daughter of Paul and Kim, and Declan (five)- son of Bruce and Kerry these two little people were so precious to him and they loved him back. He was an easy man to love. Glenn also leaves to mourn sisters Pat (Bob) Arrowsmith and Isabel Evanochko; brothers Bill (Marie), Bob (Gertie), Hugh (Wilma) and Bruce (Jean) McWhinney. Please know that he cared deeply about you and wished you all the very best. Also grieving his loss are the McKinnon family; sister-in-law Olly, brother-in-law Bruce, their children Pam (Braden Szuuts), Cindy (Ron Seid), Melinda (John L'hirondelle) and Alison (Arden Buskell), nephews Ryan and Ben (Szuuts), who he watched grow up into fine young men. Also many nieces and nephews who were all very important to him he was so proud of you all! His daughters' stepchildren and their families are also grieving his passing. Rheanne, Kelly, Mackenzie and Liham Mault; Kristian, Kristie, Kiera and Kaylie Dupuis; Scott, Sylvia and Spencer Palmer; Tara, Clarke, Wyatt and Evelyn Gallagher. They will never forget Great- Grandpa Glenn and he cherished each of you! His boyhood buddy George Borsos will also deeply miss him George, you were a loyal and true friend to him always. Glenn was predeceased by his father Hugh, mother Ruby, mother-in-law Natalia, father-in-law Egnace, brother-in-law Walter and another best buddy and sister-in-law, Naida Hann Glenn loved her dearly. Glenn was an exceptional and gifted athlete and was recently inducted into the Manitoba Sports Hall of Fame and also holds a place in the Alberta Sports Hall of Fame. He played junior football with the Weston Wildcats before joining the Edmonton Eskimos in 1952 where he had two Grey Cup appearances and one Grey Cup ring in 1954. He joined the Winnipeg Blue Bombers in 1955 and was named the Most Valuable Canadian Player that year. The next season he suffered a broken neck that ended his football playing career but he worked as a scout for the team for the next two years, including 1958 Grey Cup. He also excelled in basketball as a guard and ruled the Winnipeg Men's Senior League for over a decade with King's Best (1956 and 60) and Labatt's Blues (1963 as a player/coach) winning two provincial championships. When Glenn returned to Winnipeg to join the Blue Bombers, he married his sweetheart, the love of his life and the prettiest girl there ever was Lily in 1956 and they began their amazing adventure together. Glenn's family was the most important thing in his life and they all were his biggest fans. Watching his children grow up with all the kids on the street and attending the same schools together brought so much joy to Glenn and to see him throwing the football or baseball with his boys and any other kids who were nearby was a common practice. Glenn taught most of the kids on the street how to throw a ball, tie up their skates and many fondly remember him driving everyone to early morning hockey practice and then shoveling snow off the rink at Bronx Park so the kids could play. There are not enough words to praise this very special man. Special thanks to Winnipeg Fire and Paramedic services for their respectful response and gentle delivery to the hospital. To Katherine Graham and all the staff on the 3rd floor (east and west) of Concordia Hospital who came to our rescue after a very difficult long weekend, we thank you. Also thanks to Dr. Craig Hildahl who helped allay our worries and fears you were our rock. Thanks to Colleen Newman for her diligence and take charge attitude to get us in to the hospital when we did your kindness means so much to our entire family. Dr. James Johnston, Erin Elphee and Jane Cappella of CancerCare MB thank you for your care and over the past 10 years Glenn always felt so safe in your hands. It is a far, far better thing that I do, than I have ever done; it is a far, far better rest that I go to, than I have ever known. A private family graveside gathering will be held at a later date. In lieu of flowers, a donation may be made in Glenn's memory to Siloam Mission, 300 Princess, R3B 1M3 Street or CancerCare Manitoba, ON1160 - 675 McDermot, R3E 0V9. A man among men rest in peace, my love.