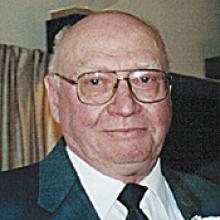 WILLIAM JOHN (JACK) DUNLOP With sadness, we announce the death of Jack Dunlop on Tuesday, April 17, 2012 at Tri-Lake Health Centre, Killarney, MB at the age of 88 years. Jack was born on January 3, 1924 in Dunrea, Manitoba to Robert William Dunlop and Mary Jane McKenzie Dunlop. He attended school in Dunrea and Belmont. He was a Sergeant in the RCAF as a bombing instructor stationed at Portage La Prairie in the Commonwealth Air Training Plan. On July 6, 1945, Jack married Verlie Enid Briscoe of Belmont. After discharge from the Air Force, Jack farmed near Dunrea for many years and together Jack and Verlie raised seven children while managing a busy farm operation. Jack was also a very active member of the community, serving on Buttrum and Turtle Mountain school boards, the Pool Elevator association, the Killarney Shopper's Mall and the Pelican Lake Agricultural Society. After farming for almost 40 years, Jack retired to Killarney due to the illness of his wife Verlie who predeceased him in 1999. Jack was also predeceased by his brothers, Tom, Bob and Jim, sister Janie and nephew Tom. Jack will be forever loved and sadly missed by his wife Bess and his seven children, Judy (Barry) Danard, Bob (Iris) Dunlop, Betty (Bob) Cappelle, Debra (Dennis) Caners, Lonn (Darleen) Dunlop, Lori (Grant) Fisher, Bev (Dave Uhryniuk) Dunlop, grandchildren Robert Dunlop, Cindy, Ryan and Jarrett Cappelle, Sean, Kyla and Cameron Caners, Jamie, Ashley, Sheralyn and Diana Dunlop, Karla and Tracy Fisher, Megan, Erin and Stephen Wady, ten great-grandchildren and one great-great-grandchild. He is survived by his sisters Agnes Macaulay and Ann Nevin, sister-in-law Beryl Vigneux as well as many nephews and nieces. Jack married his second wife Bessie Maynard Charles in 2000 and spent twelve happy years traveling, golfing, and enjoying retired life with his many friends and family. Also left to mourn are Bess's children: Arlaine (Ron) Hardern, Jim (Diana) Charles, Gail Charles, Janice (Dennis) Wark, Bruce (Holly) Charles, Debbie (Gordie) Falk, Lori Lewis, Jayney (Earl) Pulver. At Jack's request no funeral service will be held. To celebrate his life the family would like to invite friends and extended family to a reception at Killarney Legion Hall on Friday, April 27, 2012 at 2:00 p.m. In lieu of flowers, donations may be made to the CNIB, Killarney United Church Building Fund, or Tri-Lake Health Centre Palliative Care. The family would like to extend appreciation to the staff at Tri-Lake Health Centre for their kindness and compassionate care. Messages of condolence may be made online at www.wheatlandfs.com Killarney Boissevain Funeral Home (204) 523-7791 www.wheatlandfs.com