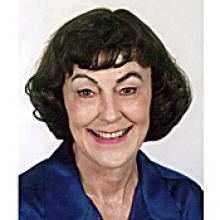 CAROLE JANE HILTON After a short but valiant battle with cancer, Carole Hilton passed away peacefully at home on Monday, April 23, 2012. Left to forever cherish Carole's memory is her husband, Murray; daughter, Kerry; grandchildren Kayleigh and Sean; sisters, Janice and Frances and their families on Vancouver Island. She was predeceased by her son, Kevin. On November 27, 1936 Carole was born in Regina, SK to Frank and May Latta. She attended Central Collegiate in Regina and the University of Saskatchewan in Saskatoon. When she was a teenager, she met the love of her life, Murray, and they were married on August 29, 1958. In 1960, they moved to Winnipeg. Their first child, Kerry, was born in 1961. Kevin came along in 1966. Carole began substitute teaching in the St. Vital School Division in 1964 and absolutely enjoyed teaching. In 1972, the whole family moved to Corvallis, Oregon for a year and a half, so Murray could earn an MBA degree. She really enjoyed her time there. She took up painting again and was quite good at it. When Carole retired from teaching in 1975, she obtained her real estate license. She enjoyed being a real estate agent and loved to meet and talk to people, and help them to find their next home. She had recently retired from real estate this December. Carole loved playing bridge with her ladies bridge club, her cottage at Pointe du Bois, gardening, and having her family over for Christmas dinner, and other holidays. She and Murray were avid Winnipeg Blue Bomber fans and held season tickets for 51 consecutive years. Carole thought the world of her grandchildren, and was very proud of their accomplishments. She and Murray went on many cruises and this past January, they enjoyed a cruise in the Caribbean that went as far as Aruba and the Dutch Antilles. Carole lived a very full life. She had many friends, too numerous to mention, but you know who you are. In compliance with Carole's wishes there will be no Funeral Service. Many thanks to the nursing staff of the Grace Hospital and Dr. Pat Harris for the wonderful and compassionate care she received. Flowers are gratefully declined. If you wish, a donation in Carole's memory to CancerCare Manitoba, the Grace Hospital or a charity of your choice would be greatly appreciated. Now her pain is gone, and she is at rest.
Publish Date: Apr 28, 2012

CAROLE JANE HILTON After a short but valiant battle with cancer, Carole Hilton passed away peacefully at home on Monday, April 23, 2012. She will sadly missed by her husband, Murray; daughter, Kerry; and grandchildren Kayleigh and Sean. She was predeceased by her son, Kevin. If you wish, donations can be made to CancerCare Manitoba or The Grace Hospital. A longer obituary notice to follow.
Publish Date: Apr 28, 2012