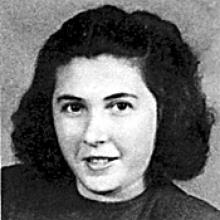 SERENA (SARAH) RIFKA KERN November 15, 1923 April 27, 2012 It is with great sadness that we announce the passing of Serena (Sarah) Kern on the fifth day of Iyar, Hebrew year 5772. Sarah died suddenly and peacefully at the Sharon Home Simkin Centre in Winnipeg. Funeral services were held on Monday, April 30 11:00 a.m. at the Shaarey Zedek Cemetery and presided by Rabbi Neal Rose. Sarah is survived by her son Jerry Kern and his wife DeAnna of Minneapolis, Minnesota; daughter Lily Hadad and her husband Shimon of Petach Tikva, Israel; grandchildren Delila Peri and her husband Moshe of Coralville, Iowa; Neil Hadad, Hila Hadad and Dean Hadad all of Petach Tikva, Israel; great-grandchildren Jonathan Peri and Elizabeth Peri of Coralville, Iowa; sister Josefa Trojan of Winnipeg and brother Alex Lebovicz of New York. Sarah was born in Sekernica, Czechoslovakia and was one of seven children born to Cheskal and Ethel Lebovicz, born Ethel Greenberg. Sarah grew up in a Jewish neighbourhood and enjoyed celebrating all the Jewish holidays with her family and friends. During the Nazi regime in the late 1930s and early 1940s, Sarah went into hiding and managed to survive in the ghettos. She also dealt with the rampant anti-Semitism that spread like cancer throughout Europe. In 1944, Sarah was captured by the German army and then shuffled throughout three concentration camps; namely, Auschwitz, Stutthoft and Bromberg. It was in each of these camps that Sarah endured the terrible atrocities of slave labour, inhumane treatment of women and atrocious living conditions. Sarah was liberated in 1945, which began her second life, so to speak. Sarah eventually traveled to the Rothchild Displacement Camp for Holocaust survivors located in Vienna, Austria. It was there where she met her future husband Ernest (Chaim) Kern who also was an Auschwitz survivor. In 1951, Sarah and Ernest moved to Canada and settled in North Winnipeg because of the vast opportunities available to immigrants. In 1952, she married Ernest and remained his dedicated loving wife for 55 years until he died. Sarah was a true north ender. She always thought of others before herself. Sarah was unselfish, not materialistic and a very kind-hearted loving woman that constantly contributed to various charities which helped the less fortunate. She even had a soft spot for the plight of animals and donated what she could to help their cause. Sarah was always very active in the North Winnipeg Jewish community and loved to socialize when she could. Sarah especially enjoyed the kind and caring nature of the Amunah Girls (as she called them) and very much loved the tea outings that they organized with her. Sarah was also a lifetime member of the Ashkenazi Synagogue. The family would like to extend their deepest and sincerest gratitude to Angela Brown who was Sarah's companion for the final two years of her life. In Angela's case, no matter how challenging Sarah was, she always provided what Sarah needed the most; i.e. a close friend during the evening hours; a person to talk to; a compassionate listener; a person to sit with and hold hands; and an advocate to speak on her behalf so that Sarah would receive the best of care from the second shift staff at the nursing home where she resided. In lieu of flowers, the family is asking that for those who wish to honour Sarah, please make a donation to the Red Star Of David located in Israel. This organization has 10,000 volunteers dedicated to helping families deal with the aftermath of a tragic event or help their loved ones that need life-threatening emergency medial care. A Daughter's Love Life must go on Even though my Yiddishe mamma is gone The memories I have I will never forget Or ever let set A friend forever To all you were true Your genuine kindness Shone through and through An inspiration You were to us all Your dedication Stood big and tall I miss you my mommy And the love you would send A magnificent woman A true friend to the end
Publish Date: May 5, 2012