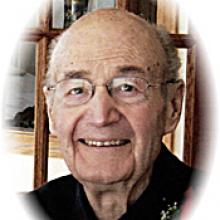 ORRIS BURKE STEINBURG February 23, 1927 April 28, 2012 On Saturday, April 28, 2012, a kind and gentle man peacefully passed away surrounded by the love of his family. Orris Burke Steinburg was born February 23, 1927, in Great Falls, Montana to Bill and Zella Steinburg, a baby brother for sister Kay. Orrie's young life was spent in many communities as his father traveled with his ministerial duties, with homes in Calgary, Wishart, Brandon, and finally Winnipeg. At age 16, he enlisted in the Navy and served on a corvette, the H.M.C.S. Bowmanville, from 1943 to 1945. Upon returning home from overseas, he married his childhood sweetheart, Joyce McLeod, in 1947. Throughout their 35 years of marriage, they were blessed with three daughters, five grandchildren, and many happy memories that included family dinners, camping trips, holidays at Grand Beach, and singing and playing guitar around the piano. Sadly, in 1983, Joyce passed away, closing one beautiful chapter of Orrie's life. In 1988, happiness was his once again with his marriage to Connie Opruk in Hamiota, MB. With this union, he was blessed with two more adult daughters, and in the coming years, six more granddaughters and twin great-granddaughters to love and cherish. As the dedicated grandparents that they were, Orrie and Connie attended every athletic, school, and musical event that they could for all of their grandchildren. Throughout their 23 years of marriage, they enjoyed overseas travel, golfing, summers at the cottage at Shoal Lake, and a vibrant social life with lots of laughter. In Orrie's life in Hamiota he had a great circle of friends who stood by him through the loss of his wife Connie in September 2011 and his illness that followed soon afterwards. Many who knew him would describe Orrie as a gifted artist, musical, generous, athletic, witty, silly, and fun-loving, but above all, he was a dedicated family man and a gentleman in every sense of the word. Orrie is lovingly remembered by his daughters: Donna (Jack) Grassie and their family Brent, Sean, Scott (Jenn) and baby due June 2012; Diane (Ron) Hucal; Pattie (Mark) Campbell and their family Karyn (Nook), Emily and Avery Stolniuk, Lauren Campbell (Jeff); Susan (John) Bothe and their children Brittany (Justin), Kristin, Chelsea; Sandy Opruk (Darcy) and her children Daphne, Carissa, Talise; and many treasured members of the extended family and community. Orrie was predeceased by his parents, Zella and Bill Steinburg, his sister Kay Titterton, his first wife Joyce and second wife Connie. A funeral for Orrie was held in Hamiota on May 2 and a celebration of his life will follow in Winnipeg, tentatively on August 11 with further information coming at a later date. Those wishing to donate in Orrie's memory may do so to the Salvation Army or the Hamiota Golf Club. The family would like to thank the staff at the Hamiota Health Centre for their compassionate care of both Connie and Orrie, as well as their dear friends in the community for their overwhelming support over these last months. Orrie considered himself a lucky man who was so grateful for all of the extraordinary chapters in his life and never was an I love you left unsaid. Thank you for being ours. Messages of condolences or special memories for the family may be directed through Dad's obituary at www.campbellfuneralhome.ca.