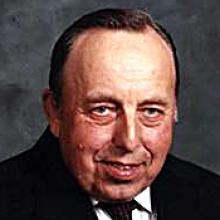 JOHN KORCHAK After a courageous battle with cancer, it is with deep sadness that we announce the passing of our beloved husband, dad and gido on Thursday, May 24, 2012, at the Vita and District Health Centre. Dad was an honest, hard working and caring person who was at the centre of our family and a pillar in our community. He will be sorely missed but his presence will live on in our hearts and his positive influence will continue to guide us throughout our lives. John was born on February 16, 1931, in Vita, Manitoba, to Paraska and Wasyl Korchak. He was educated in Vita and graduated from Shewchenko School in 1950. In 1961, John met Mary Trelinski and three years later on September 26, 1964 they were married. They were blessed with three sons, Wayne, Brian and Kenneth. After graduating from high school, John worked on the family farm before beginning a career as an electrician's assistant with Bozyk's Electric in 1951. In 1964, he started Korchak's Plumbing and Heating and finally he was employed by Boundary School Division as head caretaker and Power Engineer from 1974, to 1996. Throughout his working life, he always held multiple jobs and he was always there to serve those who needed help. Dad was very community minded and loved his home town of Vita. He served as a school trustee prior to the formation of the Boundary School Division. He was a member of the St. Demetrius Ukrainian Catholic Church committee for 27 years and served as president. He was also a member of the Board of Directors for the Vita Credit Union for 27 years. One of his proudest achievements was serving as Vita's town councilor from 1985 to 1995. Dad was also an avid sportsman. In his later years, he enjoyed watching sports such as baseball and hockey. As a young man, he was very active. He played shortstop and second base with the Vita Cubs and Vita Mallards from 1948 to 1964. In 2008, he was honoured to be inducted into the Manitoba Baseball Hall of Fame along with the 1955 Vita Cubs. He was also one of the founding members of the Vita Curling Club. Dad's greatest love was for his family. He was a special man who always provided and looked out for his family. He leaves to mourn his passing, his beloved wife of 47 years, Mary; sons, Wayne, Brian and Ken (Connie). Gido also leaves behind his special grandson, Joshua John Andrew Korchak. John also leaves to mourn, his sister Mary Caron and brother Jarvis (Elsie), sister-in-law Myrtle Hologroski, sister-in-law Helen Kalik and brother-in-law Victor (Mary Ann) Trelinski as well as numerous nieces and nephews and friends and neighbours. The family wishes to thank the many physicians who took care and provided comfort for our dad over the years. We are especially grateful to the outstanding nursing and palliative care staff at the Vita and District Health Centre who gave him comfort and dignity in his final days. Prayer service for John will be held on Tuesday, May 29, 2012, at 7:30 p.m. at the Vita Hall. Funeral services will be held on Wednesday, May 30, 2012, at 10:00 a.m. at the St. Demetrius Ukrainian Catholic Church in Vita. Interment to follow at the Parish Cemetery. In lieu of flowers, donations may be made to the Vita and District Health Centre or to the St. Demetrius Ukrainian Catholic Church. Arrangements by Vita Funeral Home Vita Manitoba Phone 204 425 3114