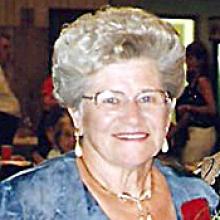 ROSIE FEDORCHUK (née KOZAK) It is with great sadness that we announce the passing of Rose on Thursday, May 31, 2012, surrounded by her family, at her home in Tolstoi, Manitoba. Rose was able to spend her final days at home supported by her daughter, Theresa, and many other friends and family members. Rose was predeceased by her parents John and Julia Kozak of Tolstoi; brothers Nestor and Vladimir; brothers-in-law Maurice Romaniuk, John Grabowiecki and Steve Antoniuk. Left to cherish her memory are her husband of 56 years, William (Bill) Fedorchuk, daughter Theresa Fleming (John); son Ken Fedorchuk (Deb); granddaughters Dana Scrivens (Byron), Hailey and Kayla Fedorchuk; grandsons Curtis and Scott Fleming (Jennifer), and great-grandson Will; sisters: twin, Theresa Antoniuk (friend, John), Bernice Murphy (John) of Toronto, Eleanor Hart (Lawrence), Sylvia Fjeldsted (Kris), and sister-in-laws Betty Kozak, Mary Pardoski (Stan), Sonia Romaniuk. Also left to cherish her memory are her numerous nieces and nephews. Rose was born on the Kozak homestead south of Tolstoi on June 22, 1936. She attended Bradley School from Grades 1 to 11. She was a permit teacher at Prawda School in Stuartburn, Manitoba (1954 to 1955). Rose married Bill on October 22, 1955 at the Sacred Heart Ukrainian Catholic Church in Tolstoi. Rose and Bill settled on the Fedorchuk century farm west of Tolstoi where they raised their family. Rose was an active member of the Tolstoi Sacred Heart Of Jesus Ukrainian Catholic Church and the Ukrainian Catholic Women's League of Canada for 47 years. In 1975 Rose was introduced to ceramics. She opened her own ceramic business out of her home and successfully ran it until 1991. Rose now had more time to devote to her love of gardening for which she had a natural green thumb. She spent countless hours transforming their yard into a place of beauty. Her love of trees, flowers and nature itself was shown in the tender care she took in the planting and nurturing of her gardens. In 1970 and 1972, Bill and Rose won the Farm Home Award in the Dominion City, Emerson and Tolstoi area. In 1991 Bill and Rose won the Manitoba Good Road Competition for the best Farm Home Grounds in the Eastern District and the provincial award for the Best Farm Home Ground Competition. Rose also volunteered her time and talent in teaching ceramics to 4-H members from Woodmore 4-H Club and Ridgeville Combined Club. In 1991, she received her eight year leadership pin. Rose was well known for her variety of crafts such as decorating Ukrainian Easter Eggs, paper tole and decorative painting of cans and rocks. Every family member has a prized scenic stone painting or Ukrainian Easter Egg to remind them of Rose. Rose was very athletic, playing Ladies softball until recently, curling (skip) until 2012, and participated in various other sports during her life. Rose's passions were her family, friends, her enormous garden and her love of BINGO. She loved gatherings with friends and family and would be the last one to bed after countless games of Scrabble or cards. The family would like to thank the ladies of the Roseau River and Vita Garden Clubs for their thoughtful labour, planting flowers in Rose's flower bed prior to her arrival home from the Bethesda Hospital on May 26. Rose spent her final days sitting on her front deck admiring her gardens. The family would like to thank the nurses Anne Plett and Pauline Gosselin of the South Eastman Palliative Care Program for their support during Rose's time at home. A Prayer Service will take place Sunday, June 3, 2012 at 7:00 p.m. at The Ukrainian National Home (Vita Hall), Vita, MB. Funeral Service will be held Monday, June 4, 2012 at 10:30 a.m. at the Sacred Heart of Jesus Ukrainian Catholic Church, Tolstoi, MB, Interment to follow at Sacred Heart of Jesus Ukrainian Catholic Cemetery. In lieu of flowers, donations may be made to the Sacred Heart of Jesus Ukrainian Catholic Cemetery fund or a charity of their choice. Arrangements by Vita Funeral Home, 1-204-425-3114