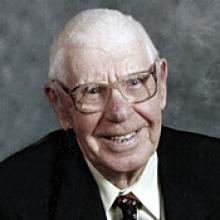 PETER JACOB PETERS Peacefully at Victoria Hospital on Wednesday, June 6, 2012, at the age of 98 years, Pete Peters of Winnipeg passed away. Funeral arrangements are pending and a full obituary will follow in Saturday's paper. Chapel Lawn www.chapellawn.mb.ca 885-9715
Publish Date: Jun 9, 2012