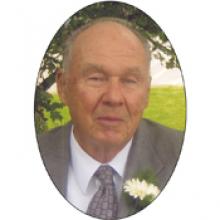 ROBERT (BOB) GILMOUR Peacefully after a full and wonderful life, Bob Gilmour passed away June 10, 2012 at St. Boniface Hospital. Bob was predeceased by his first wife Catharine (Kay) Levins of 37 years and his mother Jean Wright and stepfather Alexander Wright. His father Hugh Gilmour passed away when he was an infant. He was born in the Foxwarren area on November 20, 1927. He lived there for 65 wonderful years. He built, owned and operated the Esso Service Station and Cafe and later became the Imperial Oil Agent. After selling this business in 1974, he took over the family farm. He was very involved within the community participating in curling and hockey events. He was an acting mayor of Foxwarren and Honorary Member of the Masonic Lodge. In 1990 he married Marie Tester and retired to Lac Du Bonnet and later Beausejour. He enjoyed his retirement to the fullest. Bob will be greatly missed by his wife Marie and his twin daughters Marilyn (Ken) Braun, Carolyn (Steve) Hillier and stepchildren Shawn Tester (Anthony) Kost, Kim (John) Mueller, Michele (Joel) Semchuk and Brett Tester (Lisa) Bryce. He also has 17 grandchildren and two great-grandchildren. A celebration of Bob's life will be held in the Foxwarren Community Chapel, Foxwarren, MB on Monday, June 18, 2012 at 1:00 p.m. with Elaine Dixon officiating. Interment will follow in the Foxwarren Cemetery. A special thank you to the Dr. Nason and staff on 7AS at St. Boniface Hospital for their compassionate care. In lieu of flowers donations may be made to the CancerCare Manitoba or the Heart and Stroke Foundation. Remembrances and condolences may be emailed to bbfs@mymts.net Braendle-Bruce Funeral Service of Russell is in care of arrangements. (204) 773-2747
Publish Date: Jun 16, 2012

ROBERT (BOB) GILMOUR Robert (Bob) Gilmour of Beausejour, MB, passed away on Sunday, June 10, 2012, at the St. Boniface Hospital at the age of 84 years. The funeral service will be held on Monday, June 18, 2012, at 1:00 p.m. from the Foxwarren Community Chapel. Interment will follow in the Foxwarren Cemetery. A longer obituary will follow in the Saturday, June 16 edition. Braendle-Bruce Funeral Service of Russell is in care of arrangements. (204) 773-2747.
Publish Date: Jun 16, 2012