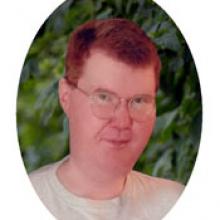 ALEXANDER DAVID KEHLER On June 14, 2012, the Winnipeg Jets lost their most fervent fan, when Alexander David Kehler lost his battle with pneumonia. David leaves to grieve his passing, his beloved wife, Pamela Moore; mother and father, Alexis and Barry Anderson; sister, Lyla Anderson; niece, Alarra; stepsister, Valdine and her husband, Ian and family, and stepbrother, Douglas; close friend of the family, Marilyn Hall; Pamela's parents, Loraine and Steve Lenaghan; her sister, Roberta and brother Edwin and their families, as well as numerous friends and acquaintances from all over the world. He was predeceased by grandparents, Alex and Catherine Kehler. David was an avid sports fan of both the Jets and the Bombers, and a computer genius who was always ready to troubleshoot anyone's technical difficulties when asked. He attended Ellen Douglas School, Lord Roberts and Grant Park High School. He graduated from the University of Manitoba with a Bachelor of Computer Science degree and also obtained a certificate in LAN Management. David's lifelong love of computers and his knowledge of them provided him with not only employment, but a window on the world, through which he made many online friendships. This enabled him to participate in many activities that he enjoyed such as online hockey leagues, Texas Hold-em Poker tournaments (with success!) and just general surfing the web and chatting with friends all over the world. David enjoyed a career that showcased his extensive computer knowledge, including working for various disability organizations, serving on several boards and consulting on the disability issues about which he felt so strongly. Most recently David enjoyed a career as a court transcriber and together with his wife, Pamela, had a successful home-based business, providing transcripts for the legal community. In his spare time, David enjoyed movies, music, chatting and spending time on his computer. He enjoyed travelling to Las Vegas with his friends and family, going to sporting events, concerts and walking with his wife and their dogs, exploring the Exchange District where they lived. David loved his wife and pets and their life together, but his first and longest love was for the Jets. After petitioning for their return he realized his dream of once again having an NHL team in Winnipeg to cheer for. He was thrilled beyond belief to get to see the inaugural comeback season and now leaves those he loved, his wife, his family and friends to cheer for them on his behalf. A memorial service will take place at 2:00 p.m. on Wednesday, June 20, 2012, at the Neil Bardal Funeral Centre, 3030 Notre Dame Avenue (across from Brookside Cemetery). NEIL BARDAL FUNERAL CENTRE (204) 949-2200 www.nbardal.mb.ca
Publish Date: Jun 18, 2012