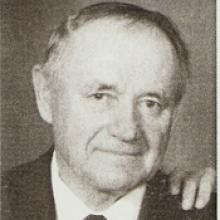 ALEXANDER (ALEX) JAMAN April 9, 1924 - June 25, 2012 Alex Jaman, 88 years of age, passed away on June 25, 2012, at the Atikokan General Hospital. Alex was born to John E. and Anastasia Jaman in Sundown, MB. He attended Somme School then worked mainly on the family farm and in the southern Manitoba area during his youth. He was a member of the St. Elias Ukrainian Orthodox Church at Sirko for many years, and recently was granted a life membership. Alexander is survived by his loving wife Lorena, step-family: Lanny (Kim) Cross, Eileen Cross, Kevin (Sharon) Cross, Tanis (Doug) Hampshire: grandchildren Lyle and Jamie Cross, Lana Johnson, Paul Cross, Marcia Gosselin and Diane Bowes, Jason Martin, Charmaine and Carla Cross, Robert Potts and Ryan Hampshire and extended families: brothers Peter, Nicholas (Stella) and John (Marjorie), as well as many cousins, nephews and nieces. He was predeceased by his parents, brother William (Bill), sisters Mary Chornopyski, Violet Shippit, Lily Jamon, Kay Dawes, Sophie Zayatz, and step-son Leslie Cross. Alex lived in Atikokan, ON, since 1952, working first at Steep Rock Iron Mines and then as a well-known woods worker and timber contractor. For many years he was a member of Atikokan Masonic Lodge No. 668, Khartum Shriners, and Atikokan Canadian Legion Branch #145. Alex will always be remembered as a devoted husband, a caring step-father and grandfather, a warm and helpful brother, a generous uncle, and a hard-working, honest businessman. Funeral service will be held at St. Elias Ukrainian Orthodox Church at Sirko, MB, on Monday, July 2, 2012, at 10:30 a.m. interment will take place in the church cemetery following the service. Arrangements by Vita Funeral Home 256 Railway Avenue Vita, Manitoba Phone 1 204 425 3114