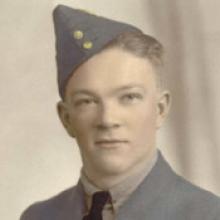 ROBERT OLIVER LUMGAIR 1919 - 2012 On Monday, July 2, 2012 at Tabor Home, Robert Lumgair, aged 92 years of Morden, MB passed away peacefully. RO, as folks called him was born on August 27, 1919 the fourth son born to RW and Louisa Lumgair. He was predeceased by beloved wife, Isabel (nee Kunzelman) in 1992, grandson, Keenan Lumgair, granddaughter, Meegan Lumgair and daughter-in-law, Shirley Lumgair. He is survived by his children, Robert Phillip (Audrey) Lumgair of Kinistino, SK, Glenn Murray (Alita) Lumgair of Portage La Prairie, MB, Lori Gail and Tom Hildebrand of Chilliwack, BC, seven grandchildren, ten great-grandchildren and numerous nieces and nephews. Cremation has taken place. Memorial service will be held on Friday, July 6, 2012 at 2:00 p.m. at Wiebe Funeral Chapel, 1050 Thornhill St. in Morden with ash interment at Knightcot Cemetery. If friends so desire, donations may be made in Robert's memory to a charity of one's choice. Wiebe Funeral Chapel, Morden In care of arrangements, 822-4755 wiebefuneralhomes.com