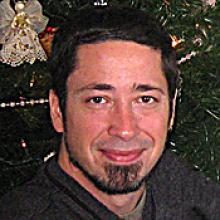 DANIEL MARC LEFEBVRE With his mother and sister by his side, Dan passed away on July 2, 2012 at the age of 42. Dan was born March 13, 1970 in Brandon, MB. As a child, he lived in Brandon, Melville, SK and moved to Dauphin in 1978. As an adult, he lived in Calgary, Winnipeg and had recently moved back to Dauphin where he was employed at Wal-Mart. In Winnipeg, he worked for Crystal Sound and was known as DJ Dan', spinning tunes at the Palomino, Mustang Sally's, Monty's, The Big A' as well as others and many social functions. He was Master of the Mic and at his craft . Music was a BIG part of his life. He also worked at Convergys and the Shell Station on Roblin Boulevard West in Charleswood. He was predeceased by his father, Rolland Lefebvre, in 2007. Dan is survived by his mother, Blanche (nee Bechard), sister Monique Lefebvre (Wayne Wasylenchuk), nephew Bryan Robson and niece Chelsea Robson. Prayer service will be held Tuesday, July 10, 2012, 7:00 p.m. at St. Viator's Roman Catholic Church in Dauphin, MB. Funeral service will follow on Thursday, July 12, 2012, 11:00 a.m. at Victoria Avenue East Funeral Home, in Regina SK. He will be laid to rest, alongside his Dad, at Regina Memorial Gardens. In lieu of flowers, donations may be made to the Dauphin and District Community Foundation (to assist young musicians) or to a charity of one's choice. Sneath-Strilchuk Funeral Services 1-877-243-4459 www.sneathstrilchuk.com