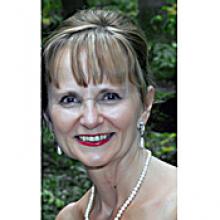 HELENE THERESE MARIE HACAULT On August 13, 2012, surrounded by loved ones, Helene relinquished her battle with breast cancer to be reunited in heaven with our brother Lucien (1966), father George (1991) and mother Clara (2010). Helene is loved and remembered by her husband Darren Blatz, sons Adrian Diaz (Valerie) and Jeremy Diaz (Danielle), stepson Kyle and devoted daughter Janelle Hacault (Warren) as well as grandchildren Beau, Xavier, Kaden, Gabriel and Alexis, sisters, Simonne Mirochnick (Percy), Lorraine Marek (Steve), nieces and nephews. Helene was born in Morden, MB on June 21, 1951 and lived on the farm in the Pembina Valley where she loved all dogs, cats and her horse Princess. She attended Stuartville school and completed her Grade 12 at Pilot Mound Collegiate. After graduating from Red River College as a Laboratory Technologist, she ventured to Niagara Falls where she worked, married and raised her two boys. When her marriage ended, she returned to the farm where Janelle was born and later resumed her career in Winnipeg. In 1991, Helene and Janelle moved to Flin Flon where Helene worked at the Flin Flon General Hospital, made many life-long friends and together with the love of her life Darren and stepson Kyle became a blended and loving family. The family thanks everyone who visited during her illness, Dr. Sethi and staff at Flin Flon Hospital, Dr. Harris at Grace Hospital Oncology Department, and Dr. Hutfluss for their hard work, dedication, encouragement, and kindness. A celebration of Helene's life will be held at St. Anne's Roman Catholic Church, Flin Flon, MB on Monday, August 20, at 11:00 a.m. and interment to follow in Mariapolis, MB on Wednesday, August 22, at 2:00 pm. In lieu of flowers donations may be made to CancerCare Manitoba or Flin Flon SPCA. If tears could build a stairway, And memories build a lane, We'd walk all the way to Heaven And bring you home again. If love could have saved you, You never would have passed' Dadson Funeral Home (Flin Flon) in care of arrangements: ph 204-687-5821