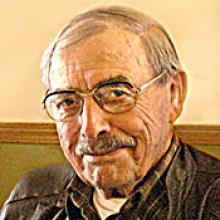 DIEDRICH BOSCHMANN Diedrich Boschmann was born on November 1, 1924 in Stuartburn, Manitoba. He passed away August 17, 2012 at the Vita Personal Care Home. With the exception of two years that he served in the Canadian Army, he lived and farmed in the Stuartburn area all his life. On June 10, 1951 he and Adina Schroeder were married. They celebrated their fifty eighth anniversary shortly before she passed away on June 28, 2009. He was also predeceased by his brother Ben in 2002. He is survived by two sons and daughters-in-law, Ewald and Janet and Irvin and Linda, and three grandchildren Christin, Eric (Carissa), and Kathryn. He was an active member of the Stuartburn Gospel Chapel as long as his health permitted. He remained involved and interested in his farm until the very end. A informal gathering of friends and family will take place at Vita Funeral Home Vita, Manitoba on Monday, August 20, 2012 from 7:00 p.m. until 8:00 p.m. Funeral Service will be held at the Stuartburn Gospel Chapel Staurtburn, Manitoba on Tuesday, August 21, 2012 at 2:00 p.m. with burial beside his wife in the Grace Cemetery Stuartburn, Manitoba. The family would like to express their sincerest thanks to the staff at the Vita Personal Care Home who gave him exceptional care. In lieu of flowers friends may wish to make a donation to the Stuartburn Gospel Chapel. Arrangements by Vita Funeral Home 256 Railway Avenue Vita, Manitoba 1- 204 -425 - 3114