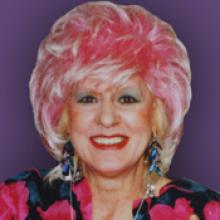 MAARA HAAS With the moon's blind eye upon me, I think: nothing more can be said, now I have said it. Hannibal, Napoleon, Lady Macbeth, are puffed-up dwarfs, where I, a cossack stallion, ride, battalions of words and swords to conquer. How will the poets of the world, witnessing, withstand the lava of my fire, diminishing to dust, their voluble cannons? And I, with my long tongue unrolling, a persian carpet, carpet the earth like a church, recalling the wonder and devotion, of dazzled multitudes. Writing at Night, On Stage with Maara Haas. Maara went peacefully with her family by her side, August 29, 2012, she was 92. Maara is survived by her sister Jean, son and caregiver Lloyd, grandson Kurt (Deborah), and great-granddaughter Merine. She is predeceased by her husband Archie and her daughter Elaine (Lani). Writer, teacher, radio performer, narrator, actress, storyteller, Maara wore many wigs, purses and earrings in her flare to be dynamic and sensational. Maara's writing career started at 15 when she was awarded first prize, a Laura Secord Award, presented by the Independent Order of the Daughters of the Empire for her essay entitled, Let No Man Dare to Call Me Foreigner. For many of her teen years, she worked with her sister in her father's drugstore. This was the inspiration for her first novel, The Street Where I Live (1976), which embraced her father's life as a Ukrainian immigrant coming to Canada. Maara's literary work was published in The Canadian Review of Literature, The Indian Record, The Washington Post and The Canadian Dimension. Maara enjoyed speaking on her writing tours and made special appearances in schools to teach creative writing classes/workshops. Maara was a national board member of the Alliance of Canadian Cinema, Television and Radio Artists, a representative for the Status of Women, and an honorary member of the Canadian Women's Institute representing rural women in Manitoba. Maara was a graduate of journalism from the University of Berkeley, California, and a recipient of an honorary doctorate from Free Academy of Arts and Sciences in Kiev, Ukraine, for her work in translation. Maara's second book, On Stage with Maara Haas (1986), was comprised of short stories and poems. It was also narrated on cassette tape. Maara made contributions to the National Film Board of Canada with narration, in one such independent animation Blowhard (1978). Her baritone voice was a joy to be heard on CBC Radio: The Hair Pin Story in Passing Parade; Box Cars and The Green-Roses Kerchief and 12 episodes of In Search of Multicultural Women in Identities; The Year of the Drought in Manitoba Short Stories; and a Western Living interview about her adventures through the Northwest Territories. Maara also performed at the Manitoba Theatre Centre and had a film role in a CTV production, Gentle Sinners (1983). After the passing of her daughter Lani in 1986 from breast cancer, Maara wrote Why Isn't Everybody Dancing (1990). Based on the slavery in Bermuda, this book also expressed grieving for her loss of her daughter. In her later years, Maara spent her time going on trips to the United States and frequenting the Salisbury House on Henderson Highway with her son Lloyd. Every day, she would put on her makeup and be ready for the world. Maara loved to shop and spent her twilight hours watching black and white classic movies. She also indulged in dark chocolates, Moore's menthol cigarettes and Bermuda dark rum, the Planter's Punch was her favourite. Maara cared deeply for nature and dedicated her backyard to being a wildlife sanctuary for small animals and birds. In lieu of flowers, please give donations in Maara's name to the Winnipeg Humane Society. Thank you to the staff of the St. Boniface Hospital for her final care.
Publish Date: Sep 15, 2012

MAARA HAAS Peacefully on August 29, 2012, at St. Boniface Hospital, Maara Haas passed away at the age of 92 years. Cremation has taken place and there will be no service. 782-3541 www.kilcollinscremationservice.com
Publish Date: Sep 1, 2012