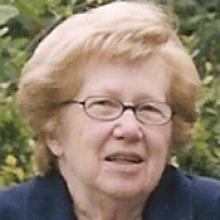 FELICITE WARNER Goodbye English Rose! The time has come, the Walrus said, To talk of many things: Of shoes--and ships--and sealing-wax-- Of cabbages--and kings-- And why the sea is boiling hot-- And whether pigs have wings. from The Walrus and The Carpenter by Lewis Carroll So now 'the time has come' to speak of Felicité in the past tense. She left us on Wednesday, September 12, 2012 at the age of 87. Her final address was the Golden Door Geriatric Centre where the wonderful staff made a comfortable life for her and supported her family by taking care of her daily needs. Everyone who works at Golden Door is to be commended for the fantastic way they treat their residents, catering as best they can to each individual. It may often seem like thankless work, but we want each and every person who works at Golden Door to know that no matter how unspoken, it meant the world to us that you were there for our mother when we were not. Felicité is survived by sisters Elizabeth and Pamela who both live in England; her children: Susanna in Calgary, Ianthe in Winnipeg, Willy (Abby) in Idaho, Sarah (Tom) in The Pas, Charlotte in Winnipeg and Oenone (Kim) in Halifax; grandchildren: Elizabeth (Greg), Kimberly, Samantha, Peter and Isabel; great-grandchildren: Alexander, Jordyn and Natalya and nieces and nephews: Lavinia, Philip, Sylvia, Alexander, Michael and Elizabeth. She was predeceased by her brother John (2007) and nephew Richard (1993). Felicité Mary Adeline Warner was born on 20 December 1924 in Dorset, England. She attended boarding school taking classes in domestic science until the age of 16 when she joined the Women's Royal Navy and served on the boats' crew in Portsmouth, England. She was demobilized in 1945 and subsequently attended the renowned Constance Spry Flower School in London. She found work there arranging flowers for weddings and parties until, so the story goes, a young doctor named Peter Warner was unable to resist the urge to pinch her posterior as she bent over to pick flowers from the hospital garden. They married in 1952 and before permanently settling in Winnipeg, they travelled, lived and expanded their family in Sudbury, Ontario, Adelaide, Australia and places in between. The family were long-term residents of Wildwood Park, living in Sections I, J and finally G where they made their home for almost 25 years before she moved to Ruttan Bay, her penultimate home address. Felicité was an active member of the Wildwood Park Community serving as a Section Representative and later with a term as President of the Wildwood Community Club. She also began her lifelong connection with the YWCA becoming a highly involved member of the Y Neighbors program. Life at that time was very different for married women. Taking care of children was the main occupation but Felicité took on the role with zeal and passion. When she was growing up the saying children should be seen and not heard' was very much in vogue and children would spend as little as 30 minutes a day with their parents and the balance of their waking hours would be in the company of a nanny. Felicité dedicated herself to making sure that she met the needs and wants of the children she cherished so much. When hearing loss became part of the family landscape, Felicité took up the cause, chauffering her children to appointments, investigating the support activities available, joining organizations dedicated to issues related to hearing loss and before long being an integral part of the Board of Directors of those organizations. Having children who attended school out of the area, Felicité sought out an opportunity for her children to be involved in an after school activity that would allow them to get to know other children in Wildwood Park. So, along with another committed mother, Ringette was introduced and in 1990 the two women were inducted into the Manitoba Ringette Hall of Fame and given Honorary Lifetime Memberships for their contribution to the advancement of the sport. It was about that time that the school system began to pique Felicité's interests. She decided to run for election as a School Board Trustee in the Fort Garry School Division and for the next 12 years she dedicated herself to representing the taxpayers of Fort Garry in matters related to the education of children in the division. Felicité also became aware of a small bookstore called Growing Minds that was located across from the building where Jon's Hairstyling, her weekly port of call was located. Finding out that it was a bookstore dedicated to children's books, she soon became an employee. Sadly, the bookstore eventually closed but with the experience of working there and despite the fact that she was approaching the age when most people retire, Felicité had a strong desire to extend her career. With that in mind and the contacts she had developed while working for the store, she approached McNally Robinson Booksellers and the rest is history. Felicité had a life of joy and passion but without a doubt, the McNally years were her golden times. Her love of books, children and being the centre of attention in the most modest way, were, for her, the ultimate gift. What a great end to a life well lived! Believe it or not, we have not got much past the surface of this amazing woman's wonderful life. The family hopes that those who knew Felicité and want to share their recollections will be able to attend the Memorial Service that has been arranged at Thomson In the Park , 1291 McGillvray Blvd. on Wednesday, September 19, 2012 at 7:00 p.m. We feel that our mother would want The Friends of the Winnipeg Library or the Society for Manitobans with Disabilities to be the recipients of any expressions of sympathy or memorial contributions. Felicité's Facebook page will have up-to-the minute information about the Memorial Service and will be a repository for anything those who knew her would like to share: http://www.facebook.com/felicitesbookcase