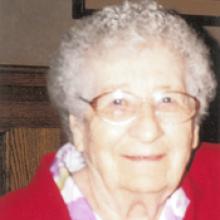 MARY FEDIUK Mary Fediuk passed away on Wednesday, September 12, 2012 at the Dauphin Regional Health Centre at the age of 101 years. Mary was born on June 9, 1911 at Weiden, MB to parents Mike and Eva Baschuk. She had 10 brothers and sisters. Mary attended school in Weiden. At the age of 15, she left home to go to work as a housekeeper in Fork River and Dauphin. In 1928 at the age of 17, Mary married William Fediuk, and together they resided at the Fediuk family farm in Weiden. Married for 42 years, Bill and Mary had 10 children: John, Peter, Steve, Anne, Angulla, Eva, Alex, Mike, Nick and Harry. Times were very hard on the farm. Mary worked hard raising the children and assisting with the chores. In 1971, Bill passed away and Mary moved to Rorketon where she lived until the year 2000. At that time, she moved to Happy Haven in Dauphin. Mary was a very kind-hearted and cheerful person who spoke her mind and was always ready for a good joke. She was the life at every party. For most of her life, Mary was a church member and belonged to the Ukrainian Catholic Womens' League. She enjoyed playing bingo and cooking. Mary is survived by her sons Peter (Margaret), Mike, Harry (Nellie) and daughter Anne (Peter); son-in-law Peter Tkach; daughters-in-law Shirley, Sylvia, Hazel and Virginia. She is also survived by one brother Mike. Mary has been blessed with 27 grandchildren and 40 great-grandchildren. Mary was predeceased by husband Bill; sons John, Steve (Louise), Alec and Nick; daughters Angulla and Eva (Gordon). Funeral service will be held on Tuesday, September 18, 2012 at 10:00 a.m. from the Ukrainian Catholic Church of the Resurrection, 801 Jackson Street, Dauphin, MB. Interment will follow in the Dauphin Riverside Cemetery. In lieu of flowers, donations in memory of Mary may be made to the Ukrainian Catholic Church of the Resurrection in Dauphin. The family would like to thank the hospital staff for taking care of Mary for the past two and one half months. Thanks to all her friends at Happy Haven for their friendship and assistance. Sneath-Strilchuk Funeral Services 1-877-243-4459 www.sneathstrilchuk.com