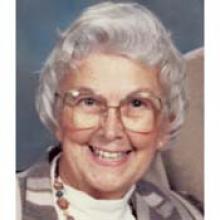 ISABEL ROSALIE ARBUTHNOT (nee DERRIEN) With her daughter Adele and grandson Tommy by her side, Isabel passed away peacefully, at age 95, on Friday, August, 17, 2012, in Nanaimo, BC. Isabel is survived by her children Adele (Ed), Michael (Caroleen), Lynne (Ray), and Bill, grandchildren Tommy, David, Kristina, Jason, Jordan, Maryn, John, Derek, Justin, and Stephen, extended family Deborah Metcalfe, Marty Catellier, and Betty Arbuthnot, and many nieces, nephews, and great-grandchildren. Isabel was predeceased by her husband John William (Bill) in October 2005, her daughter Melanie in 1996, her sister Cecelia, her brothers Frank, Harvey, Yves, Louis, and Jean-Paul and her parents Francois M. Derrien and Marie Gabrielle Kerbrat. Isabel was born June 1, 1917 in St. Laurent, Manitoba, growing up there until moving to Winnipeg at a young age, where she spent the majority of her life raising her family with husband Bill of 63 years, until retiring with Bill to the West Coast in 1977. Mom was an avid gardener, and would spend many hours trying to nurture her various gardens at Hillside Beach, Quadra Island and finally in Nanaimo. While she always said she didn't like to cook, her dinners were always wonderful, and we were always amazed how she could feed a family of seven plus friends with only one pound of hamburger and no one went away from the table hungry. Mom's greatest joy was her painting. Over the years she experimented with many mediums, water colours, oils, pen and ink and acrylic. She loved roses and this showed through her many and varied paintings of them. She never felt her paintings were good enough to sell, but she would give them away to anyone that showed an interest and today they are hanging in many homes throughout the country, bringing joy to all those who see them. Cremation has taken place and a family gathering to celebrate Isabel's life will be held at a later date.