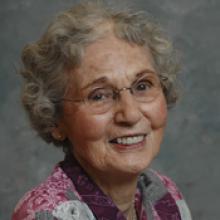 JEAN AUDREY CUMMING (nee COTTINGHAM) 1922 - 2012 Peacefully with family by her side, Jean passed away on Friday, September 14, 2012 at the Victoria General Hospital. She was predeceased by husband, William (Bill); parents Harold and Florence; brothers Lloyd, Glen; sisters Margaret, Phyllis and Dorothy, and her fiancé, Doug Cawker, who died during the Second World War. Jean will be sadly missed by her son, Robert (Eliza), daughters Lenore Graham, Jeanne, Sandy, and Willa Mann (Craig); brother, Robert Cottingham (Olive); 10 grandchildren: John, Hugh, Roger, Berythe, Shelley, Stacy, Scott, Ami, Nick and Kelsey; 12 great-grandchildren, and sister-in-law Agnes Forbes. Also special friends, Els and Eileen from Morden. Jean was born in Winnipeg. She moved to Petersfield area at age two, growing up on the family farm. She moved to Winnipeg to attend Gordon Bell and Kelvin High Schools and after graduating, attended Normal School. Married in 1946, Bill and Jean lived in Winnipeg, Skinner's Nursery (Dropmore), Teulon, and Morden where she was an elementary school teacher for a number of years. Mom was a homemaker looking after five children and a caregiver to Dad for many years. In 1983, they moved back to Winnipeg when Dad's health was failing. They were married for 53 years. Mom loved animals (cats, horses, dogs), enjoyed walking, reading, music (attending many concerts with her sister and family), doing crosswords, watching sports especially baseball (Toronto Blue Jays) and spent many a night after supper playing a game of Scrabble with family. She loved time spent with her family. She enjoyed travelling in Canada, the United States, Europe and Britain and fulfilled her dream of going to New York City. Her last trips were to British Columbia and the Maritimes where she visited the Cumming family homestead and area in Nova Scotia with all five of her children. Her visits to the cottages at Clearwater Bay, Red Deer Lake and Gimli were all favourites of hers. As a family, we would like to thank Dr. Richard Blouw for his many years of excellent care and the staff in ER and Unit 4N at Victoria General Hospital for their compassionate care. Also a thank you to staff at Seine River Retirement Residence (Jean's last home) and Age in Place home care staff, with special thanks to Lori and Erin. A come and go Celebration of Life for family and friends will be held on Sunday, September 30 from 6:00 p.m. to 8:00 p.m. at the Assiniboine Park Conservatory. In lieu of flowers, donations may be made to the Winnipeg Humane Society, 45 Hurst Way, Winnipeg, MB R3T 0R3; FortWhyte Alive, 1961 McCreary Road, Winnipeg, MB R3P 2K9, or the Alzheimer Society of Manitoba, 120 Donald Street, Winnipeg, MB R3C 4G2. We will always remember your love and beautiful smile . Rest in Peace dear Mom. NEIL BARDAL FUNERAL CENTRE 204-949-2200 www.neilbardalinc.com