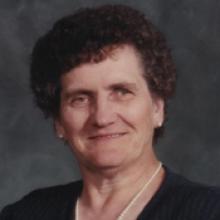 MARY KORCHAK (TRELINSKI) It is with deep sadness, that we announce the passing of our beloved Mom and Baba on Saturday, September 29, 2012, at the Vita and District Health Centre at the age of 74 years. Mary was a devoted Mother, Wife and Baba and she will be missed by all who knew her. Mom was born on November 13, 1937 on the family farm in Trentham, Manitoba, to Anne and Philip Trelinski. She attended school in Sarto, Manitoba but left school at an early age to help on the farm. She learned the importance of hard work and always looked to help others when needed. Later she moved to Winnipeg and worked in the city for a number of years. In 1961, Mary met John Korchak and three years later on September 26, 1964 they were married. They were blessed with three sons, Wayne, Brian and Kenneth. Mom began her lifelong mission of raising her family and providing a good home for them. While Dad was very involved in community endeavors, Mom focused on taking care of things at home. She was a wonderful cook and baker and enjoyed hosting family events. She took great pride in her beautiful flowers and always produced an abundant harvest from her garden. Mom loved drives in the country and enjoyed listening to Ukrainian music. She also enjoyed many card games and having coffee with her friends and neighbours. She was dedicated to her church and was a frequent canvasser for many causes. Mom was predeceased by Dad just four months earlier in May 2012, she was unaware of her own illness at the time of his passing. She was also predeceased by her parents and six brothers. Mom leaves to mourn her passing, her three sons, Wayne, Brian and Ken (Connie). She also leaves behind her treasured grandson Joshua Korchak. Baba swelled with pride and always showered Joshua with love and affection. Mary also leaves to mourn her passing, her sister Myrtle Hologroski, sister Helen Kalik and brother Victor (Mary Ann) Trelinski; as well as her sister-in-law Mary Caron, brother-in-law Jarvis (Elsie) Korchak, and numerous nieces and nephews, friends and neighbours. The family wishes to thank all the staff at the Vita and District Health Centre who were so kind, thoughtful and supportive of Mom and our family during this difficult period. We are heartbroken but forever grateful. Prayer service for Mary will be held on Wednesday, October 3, 2012, at 7:30 p.m. at the Vita Hall. Funeral services will be held on Thursday, October 4, 2012, at 10:30 a.m. at the St. Demetrius Ukrainian Catholic Church in Vita. Interment to follow at the Parish Cemetery. In lieu of flowers, donations may be made to the St. Demetrius Ukrainian Catholic Church or the Vita and District Health Centre. Arrangements by Vita Funeral Home Vita, Manitoba, 1-204-425-3114