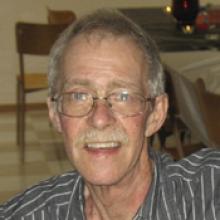 DOUGLAS LOW September 5, 1952 - September 30, 2012 Peacefully, after a year-long battle with cancer, Douglas Harold Low passed away on September 30, 2012 at the age of 60. He will be sadly missed by his wife Suzanne, son Jeff, and grandchildren Cameron and Samantha. Left to cherish his memory are his mother Margaret, sisters Brenda (Larry Leclair) and Heather (Al Dreger), and brothers Terry (Laura), Jim (Terri) and Brent (Cheryl). He will also be missed by his many in-laws whom he loved as much as his own family. He was predeceased by his father Harold and stepfather Bert VanCaeseele. Doug was born in Minnedosa, MB and spent most of his childhood years in Moosomin, SK. As a young man he moved to the big city of Winnipeg to spread his wings. There he met his wife and started a family. Both he and Suzanne missed living in a small town and after three years moved to St. Pierre Jolys to raise their son. He lived his life to the fullest and was always full of stories. He made friends easily and was loved by everyone who knew him. His pride and joy were his son and grandchildren. He had a passion for music and fishing and he gave his heart and soul to his work. He will be missed by his dear friends at Canada Wrap, Prosperity Knitwear, Excell, Bunzl and Trimor. A celebration of his life will be held at the St. Pierre Catholic Church on Saturday, October 6, 2012 at 11:00 a.m. A special thank you to the staff of the St. Pierre Hospital and CancerCare for their excellent and compassionate care. Donations in Doug's memory may be made to the Canadian Cancer Society. Sleep well my love. Till we meet again. Arrangements by Vita Funeral Home Vita, Manitoba, 1-204-425-3114